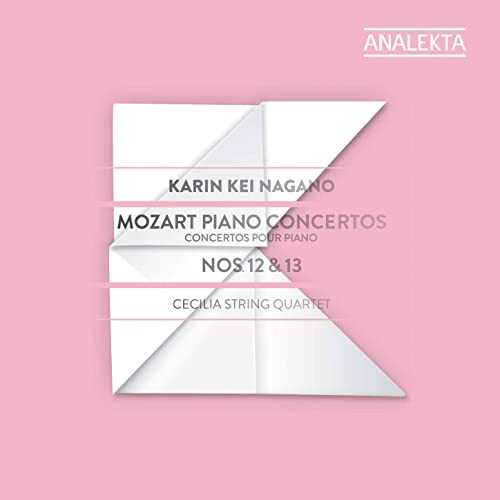 Supported by the incredible Canadian ensemble Cecilia String Quartet, known worldwide for their expressiveness and generous sound, pianist Karin Kei Nagano gives a personal rendition that is as brilliant as it is elegant of two piano concertos by Mozart: K.414 (in A major) and K.415 (in C major).

Both written in 1782, at the beginning of his independent career, these masterpieces are amongst the first concertante works composed by Mozart after leaving Salzburg for Vienna. This carefully executed double was originally written for a full orchestra, but the composer gave permission for it to be performed “a quattro”. The orchestral magnificence fades away, allowing the musical nuances to be expressed in a more personal way.

By calling upon the artist’s virtuosity, this double highlights what Mozart was looking for first and foremost: a “happy medium” between “too difficult” or “too easy”, he said. He later added “here and there, only connoisseurs will find satisfaction but in such a way that even non-connoisseurs must feel content without knowing why”.

With her precise and refined playing, Karin Kei Nagano does justice to this seductive music that was already innovative for its time, and was available to everyone.