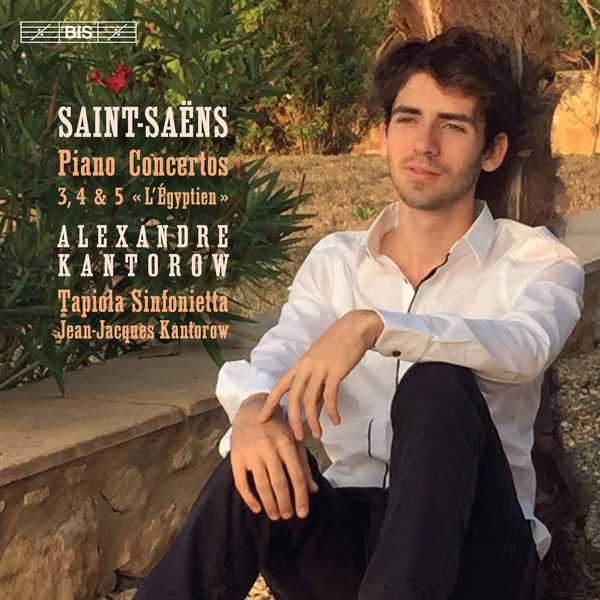 Jean-Jacques Kantorow and the Tapiola Sinfonietta have championed the music of Saint-Saëns on a series of acclaimed discs, and are now joined by the young Alexandre Kantorow –son of the conductor – for a survey of his works for piano and orchestra. In 1858, Saint-Saëns became the first major French composer to write a piano concerto, but on this first disc of two the Kantorows present the three last concertos. Composed over a period of almost 30 years (1868 – 1896), these are highly individual works: Piano Concerto No. 3 is a bold attempt to reconcile Classical form with a Lisztian pianistic brio, No. 4 employs an unusual formal scheme in which themes are reused in a cyclic manner and, finally, the ‘Egyptian’ (No. 5), named after the second movement, which in the composer’s own words describes ‘a sort of Eastern journey that goes all the way to the Far East’.

There has been a vogue for the music of Saint-Saëns in the late 2010s, which is all to the good, and the piano concertos especially have come in for increased exposure. It turned out that all they needed was some flair and enthusiasm; they’re marvelous. This release by pianist Alexandre Kantorow, with the Tapiola Sinfonietta conducted by Jean-Jacques Kantorow (his father), stands out even among strong competition and even considering that it does not include the most popular of the five, the Piano Concerto No. 2 in G minor, Op. 22. Saint-Saëns was paradoxical: he was a classicist who admired Liszt and was in turn admired by him. The delightful effort to reconcile Classical concerto forms with splendid virtuoso effects (the composer was one of the great pianists of his day) can be heard in all these pieces, but sample the second movement of the increasingly popular Piano Concerto No. 5 in F major, Op. 103 (“Egyptian”), where a giant, sweeping Lisztian gesture on the piano fills the role of the first theme, while the second theme is a catchy melody Saint-Saëns supposedly heard from boatmen on the Nile. All the concertos require a pianist of both grace and power, and that is what they receive at the hands of the young Alexandre Kantorow, whose background is as a Lisztian. BIS contributes superior sound from the Tapiola Concert Hall. Highly recommended.