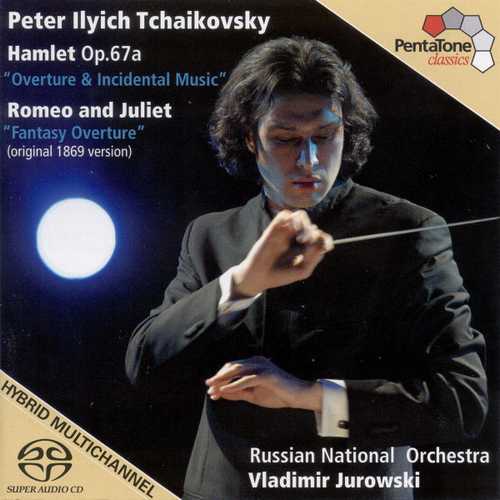 Any recording on PentaTone with Vladimir Jurowski must be regarded as an event and this release certainly lives up to its promise. Russian conductor and Russian orchestra play this astounding music with full romantic panache!

Tchaikovsky’s rarely recorded overture and incidental music for Hamlet, and his even more rarely recorded original version of the Fantasy Overture Romeo and Juliet, are hardly the crown jewels of his output. The former has some fine music in it — the blustery overture and the fetching Allegro simplice Entr’acte in particular — but most of it, while appropriate as incidental music, can hardly stand repeated listenings. The latter likewise has fine moments, but it is less formally cogent and dramatically compelling than its later incarnation.

That said, these are truly first-rate performances. Vladimir Jurowski had previously demonstrated his understanding of Tchaikovsky’s music in his brilliantly colorful and highly balletic recording of the composer’s under-valued Third Suite for Orchestra, and his direction here is no less sympathetic. As much as the Hamlet music and Romeo and Juliet overture can hold together, they hold together here in Jurowski’s tight, taut performances. The Russian National Orchestra responds to Jurowski’s direction with passion and panache, and that enthusiasm goes a long way toward overcoming the music’s inherent weaknesses. Captured in immediate super audio, multi-channel digital sound, this disc may initially appeal only to Tchaikovsky’s most dedicated fans, but they will most likely be very happy to hear it.