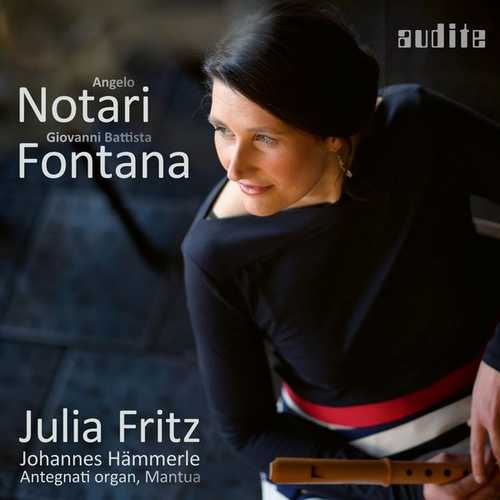 Compared to the Italian centres of power – Milan, Florence and Rome – the Lombardian city of Mantua in the Po Valley is small in size. All the more prestigious was the commitment to the arts by the ruling Gonzaga dynasty: artists such as Andrea Mantegna, Giulio Romano and Leon Battista Alberti created lasting masterpieces in their paintings and architecture for them, whilst musicians such as Giaches de Wert and Claudio Monteverdi consolidated Mantua’s reputation throughout Europe. Their stage was within the grand complex of the ducal palace and the adjoining church of Santa Barbara: an impressive synthesis of the arts consisting of Mannerist architecture and painting – and an ideal space for music.

This magical place was chosen by recorder player Julia Fritz together with organist Johannes Hämmerle, soprano Magdalene Harer and harpist Reinhild Waldek to record works by Giovanni Battista Fontana and Angelo Notari, two contemporaries of Monteverdi. Fontana’s Solo Sonatas for violin and continuo, which Julia Fritz interprets on various recorders, belong to the canon of early baroque violin music, while the pieces by Notari, some of which are recorded here for the first time, hail from a British Library manuscript which the composer presumably produced for English music lovers in the circle of King Charles I. They are variations and arrangements of songs that demonstrate the high standard of solo and ornamental art of the time, which were as popular in Italy as in the rest of Europe.

A special feature of this recording is the interplay between a chamber music formation and the famous organ of Santa Barbara. Graziadio Antegnati, one of the great Italian organ builders of the sixteenth century, equipped the instrument with special stops and the meantone tuning of the time; following extensive restoration, it can now be admired once again in its original sound, perfectly suited not only for solo pieces but also for accompanying mixed vocal-instrumental ensembles.