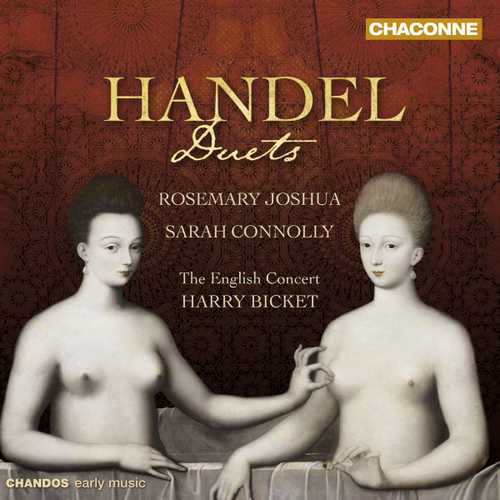 Solomon
03. Part I: Welcome as the dawn of day

Belshazzar
08. Act III: Great victor, at your feet I bow

This new Handel collection features two great singers alongside the English Concert, arguably one of the best baroque orchestras in the UK. Duets play a key role in Handel’s stage works. A master of the Baroque opera seria medium, with its extended sequence of solo arias and recitative dialogue, he understood the dramatic effectiveness of occasional numbers blending two voices, generally those of a soprano heroine and a castrato hero.

Sarah Connolly CBE has become a highly sought-after performer on the operatic stage in a wide range of repertoire. Her Handelian roles have including the title-role in Giulio Cesare for the Glyndebourne Festival; in Agrippina, Xerxes, Ariodante and Ruggiero (Alcina) for the English National Opera and Ino/Juno (Semele) for the San Francisco Opera. She also starred in the 2009 Last Night of the Proms.

Rosemary Joshua is well known for her Handel roles, having sung Ginevra (Ariodante) in San Diego; Angelica (Orlando) in Munich, for Covent Garden and at the Aix-en- Provence Festival; and the title-role in Semele for which she was nominated for a Laurence Olivier Award and recorded for Chandos. Her recording of Partenope for Chandos was awarded the Stanley Sadie Handel Recording Prize.

The English Concert is conducted by Harry Bicket.

With a combination of such forces, this album is sure to make for a must-have for all Handel enthusiasts.