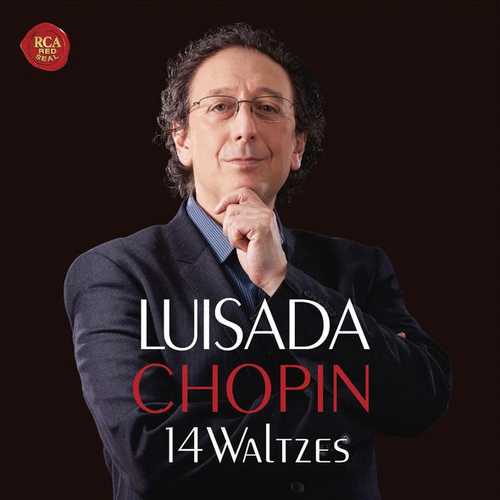 This is Jean-Marc Luisada’s sixth album for RCA Red Seal since 2007. Luisada is well-known for his interpretation of Chopin, and other romantic repertoire with deep-felt emotion and beautiful tone.

This new recording will also be his second recording of Chopin’s Waltzes. Luisada has chosen to perform the Waltzes in a different order from the published opus numbers; a new order based on tonality, mood and atmosphere. This recording was produced by Cord Garben, the noted recording producer, pianist, conductor and scholar who used to work with Karajan, Barenboim, Argerich, Abbado, and Levine among others.

The French pianist Jean-Marc Luisada has long been regarded as one of the most distinguished Chopin interpreters of his generation. And the accolade is well-earned, for in 1985, shortly after he was launched on his international career, he was a prize-winner in that year’s International Chopin Competition in Warsaw, one of the most prestigious music competitions in the world.

The young pianist’s earliest recordings already featured waltzes and mazurkas by Chopin. After signing an exclusive contract with RCA Red Seal in 1998, he immediately released an all-Chopin programme. Above all he has made a name for himself as a leading exponent of Romantic piano music – not only as a soloist but also as a chamber musician and, finally, in the concerto repertory.

While Chopin remains an ever-present figure in his programmes, Luisada has also recorded piano music by Georges Bizet and Gabriel Fauré, helping to rehabilitate their works. In 2010, he marked the bicentenary of Chopin’s birth by releasing a further CD of the Polish composer’s works, including some that he had not previously recorded.