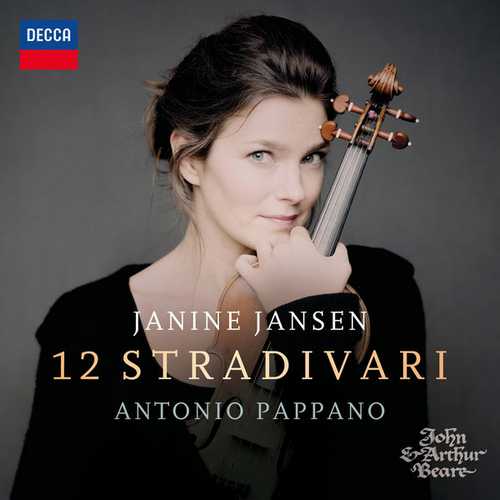 For the first time in history, twelve of the most wonderful violins ever made by the finest violin maker of all time, Antonio Stradivari (1644-1737), have travelled across the world for a ground-breaking new project with violin superstar Janine Jansen. The resulting album, 12 Stradivari, captures the individual characters of each instrument in specially-curated music accompanied by Sir Antonio Pappano at the piano.

These days Stradivari’s instruments can reach prices well over $20 million and some of the foundations and museums who own them let them out only on rare occasions. This is also why this recording is particularly special: some of these 12 Stradivari have not been played for many decades and, possibly, have never ben commercially recorded before. Others belonged to legendary virtuosi including Fritz Kreisler, Nathan Milstein, Ida Haendel and Oscar Shumsky. Janine herself is widely considered to be one of the greatest violinists of our time, and this album is her first release with Decca in 6 years.

The project was devised by Steven Smith, Managing Director of the world’s pre-eminent violin dealers, J & A Beare. Having worked with Stradivari instruments his entire career he wanted to bring 12 of the very best violins together to show their brilliance and also their differences. He also wanted to record for posterity their sounds in one single, unique record and approached Janine and Decca for the extraordinary challenge. Smith knew where in the world the 12 violins for this project were and who owned them. In spite of the numerous logistic challenges of aligning the schedules of all the owners and players at a time when travelling was at its most difficult, he was able to create a two-week-period when all violins could be flown to London.

Janine says: “When Steven Smith approached me about this project, I knew it was a once in a lifetime opportunity! It was my chance to experience the magic of these famous instruments and to explore the differences between them, especially bearing in mind that some of them have not been played in many years. I was very fortunate to be able to share this experience with my wonderful collaborator Sir Antonio Pappano.”

This unique project is brilliantly captured through an unmissable documentary named Janine Jansen: Falling for Stradivari. The film follows Janine’s unrepeatable experience of discovering each instrument’s individual qualities and immense capabilities. Her working relationship with Sir Antonio Pappano reveals the astounding energy, dedication and abundance of creativity needed to conquer such a formidable challenge. Directed by BAFTA award-winning Gerry Fox, Falling for Stradivari will be premiered at Curzon cinemas in the UK in September, 2021.

Janine’s recording debut in 2003 achieved epic success within the initial rise of digital sales, and to date she has 850k units sold with Decca and over 106 million streams. She has won numerous prizes, including the Herbert-von-Karajan Preis 2020, the Vermeer Prize 2018 awarded by the Dutch government, five Edison Klassiek Awards, NDR Musikpreis for outstanding artistic achievement, the Royal Philharmonic Society Instrumentalist Award for performances in the UK and the Concertgebouw Prize to name just a few.