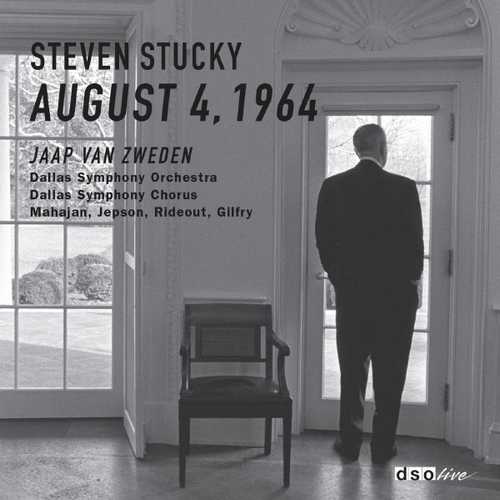 This is the world premiere recording of Steven Stucky’s August 4, 1964, a “concert drama” commissioned by the Dallas Symphony Orchestra to honor the 100th anniversary of Lyndon Baines Johnson’s birth. It received its world premiere Sept.

18, 2008 with Jaap van Zweden conducting the Dallas Symphony Orchestra and Chorus and soloists in the Morton H. Meyerson Symphony Center in Dallas, Texas. The work centers on a single day in the Johnson Presidency when President Johnson and Secretary of Defense Robert McNamara decided to escalate the Vietnam conflict, and when the bodies of three slain civil rights workers were discovered in Mississippi.

The libretto by Gene Scheer (Jake Heggie’s Moby Dick; Tobias Picker’s An American Tragedy) juxtaposes White House telephone tapes, letters from the slain civil rights workers and their mothers, speeches by President Johnson, and other contemporary sources. Stucky’s music heightens the gripping narrative, which pulses with contemporary relevance. This CD was recorded during live performances in May, 2011 at the Meyerson Symphony Center.

August 24, 1964, was the date on which two history-altering events in the presidency of Lyndon Baines Johnson coincided: the discovery of the bodies of three young civil rights workers, two white New Yorkers and a black Mississippian, after their murders, and the Gulf of Tonkin incident, which led to the disastrous escalation of U.S. involvement in Southeast Asia. Composer Steven Stucky and librettist Gene Scheer received a commission form the Dallas Symphony Orchestra to commemorate the 2008 centennial of Johnson’s birth, and selected the events of this day to encapsulate both his achievements in his commitment to the civil rights movement and his failures of foreign policy. It’s a daunting task to put the tragic import of these disparate events (along with enough background information to make them comprehensible) together into a coherent narrative, but Scheer pulls it off with great skill and insight, and his dramatic trajectory carries real emotional punch.

On a number of levels the piece calls to mind John Adams’ opera The Death of Klinghoffer. Scheer’s libretto, like Alice Goodman’s for the opera, is based on relatively recent historical events, and its narrative is largely made up of recollections of those events, made after the fact, by the characters involved or those whose lives were touched. The chorus, too, with some exceptions, delivers poetic commentary on the actions. Stucky’s music for the piece is less dissimilar to Adams’ Klinghoffer style than is generally true of his work, not only in his handling of the voices but in its tonal idiom, and including some of the minimalist mannerisms of Adams’ score. Stucky’s orchestral writing is characteristically inventive and vivid, with plenty of color and variety. The lovely, understated orchestral elegy at the center of the work and the poignant recurring chorus, “I continually think of those who were truly great” are the emotional and musical highlights of the piece. The elegy could be effectively presented independently as a memorial to LBJ.

Jaap van Zweden leads the Dallas Symphony Orchestra and the Dallas Symphony Chorus in committed, sensitive performances at a live 2011 concert, three years after the work’s 2008 premiere. Soprano Indira Mahajan and mezzo-soprano Kristine Jepson sing with impressive dignity and lyricism as the mothers of two of the slain men, and baritone Rod Gilfry sings with resonance and is persuasive as LBJ, conveying his languid drawl without overdoing it. Tenor Vale Rideout is less effective, but that is probably due largely to the frenetic, less sympathetic, lines that Scheer and Stucky give him; it’s hard not to notice parallels with the role of Kissinger as evil henchman in Nixon in China, but without the humor. The recording level is low and requires a boost in volume to come across as fully present. The voices are sometimes slightly distant but generally the balance is good and the sound is clean.