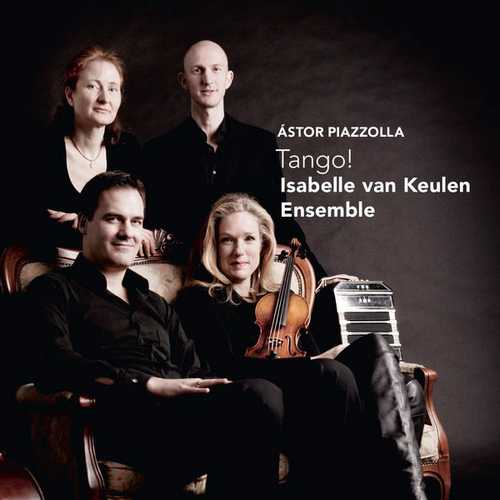 The album ‘Tango!’ is a collection of popular pieces by the great Argentinean composer Astor Piazzolla. The artists are the Isabelle van Keulen Ensemble, a group that was put together by the critically acclaimed Dutch violinist especially to perform the music of Piazzolla and other composers working in the field of the tango.

The Isabelle van Keulen Ensemble was formed in January 2011 by violinist and violist Isabelle van Keulen especially for a series of concerts in Haarlem’s Concertgebouw titled ‘Carte Blanche’ which showcased the music of Ástor Piazzolla. After the enormous success of their first concert many further invitations followed, and the group has since performed at the Concertgebouw in Amsterdam as well as international music festivals like Schleswig Holstein Musikfestival, Rheingau Musikfestival and Delft Chamber Music Festival. Since winning the Eurovision Young Musician of the Year award in 1984, celebrated Dutch violinist Isabelle van Keulen can look back on many years of musical diversity. She not only plays the violin and viola with the same commitment, but has also has been part of a 20- year collaboration with the Dutch pianist Ronald Brautigam (with whom she has made several recordings for Challenge Classics), performed with and directed the Norwegian Chamber Orchestra, founded the Delft Chamber Music Festival, and been a regular soloist with orchestras such as the Royal Concertgebouw Orchestra and Berlin Philharmonic.