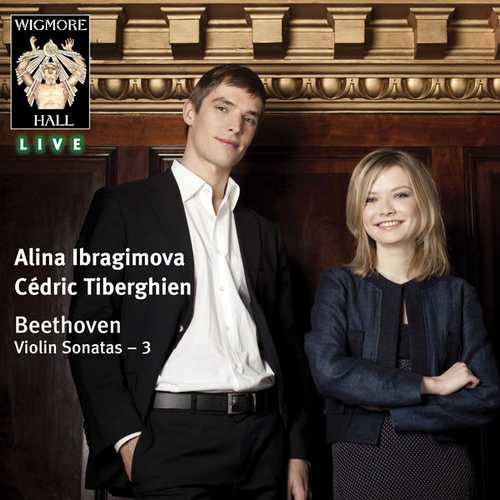 Marking the end of their unanimously-praised series, “star-kissed young performers,” [The Times] Alina Ibragimova and Cédric Tiberghien, release the third and final volume in their live recordings of the complete Beethoven violin sonatas.

This last release features sonatas No.6 in A op.30 no.1 and No. 3 in E flat op.12, as well as the No.9 in A op.47, better known as the ‘Kreutzer’, Beethoven’s biggest and most challenging sonata. After its live performance at the Wigmore Hall in May 2010, The Times commented “The duo’s boldest showcase was the Kreutzer Sonata, with its firecracker outer movements and lovely soft centre” and “Ibragimova’s bow worked overtime. Loose threads kept dangling. Her pizzicato was wicked.” In accomplishing works that many artists do not attempt until late in their career, the duo have brought something new and original to this pinnacle of the chamber repertoire: “the partnership with Tiberghien sounds fresh and spontaneous [Financial Times]. Meanwhile BBC Music Magazine, in its 5* review, comments “[Ibragimova] has the kind of tone and expression that pins you to the back of your seat.” The duo, who met on the BBC Radio 3’s New Generation Artists scheme over five years ago, describe their playing and recording of the complete sonata cycle as, as much a personal as a musical journey. Tiberghien comments “To travel through all ten sonatas, to play them live, is really something that changes you, as a musician and also as a human being”.