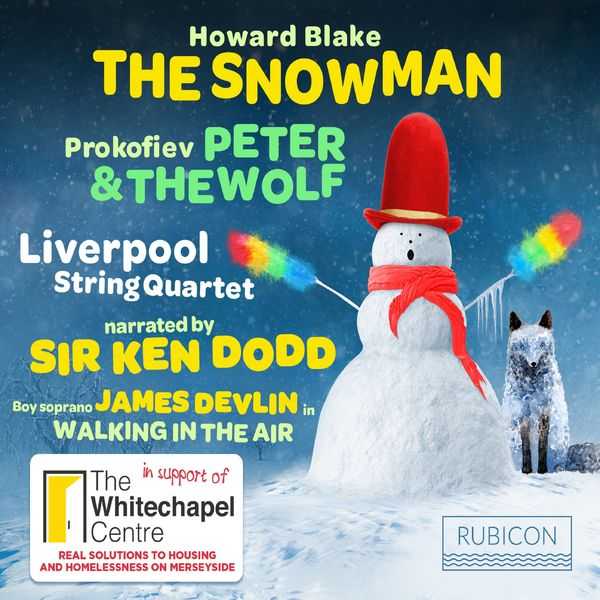 Recording the narrations for Peter & the Wolf and The Snowman was the last project Sir Ken Dodd undertook. One of the UK’s most famous and best loved comedians and entertainers, he passed away aged 90 in March 2018. This famous son of Liverpool was a keen supporter of the Whitechapel Centre, the Liverpool based charity that is the leading homeless and housing charity in the Liverpool region, working with people who are sleeping rough, living in hostels or struggling to manage their accommodation. Rubicon will support the work of the Whitechapel Centre by contributing a percentage of the royalties from sales of this album to the charity that Sir Ken supported.

Howard Blake’s music to The Snowman adapted as a 26 minute animated Channel 4 TV special was first broadcast in 1982, four years after Raymond Briggs’ much loved and best-selling children’s book. It has been staged and become a videogame and the hit song ‘Walking in the Air’ recorded by Aled Jones in 1985 propelled him to stardom and became a huge hit.

Prokofiev’s perennial favourite Peter & the Wolf was composed in 1936 and was written to help children discover the instruments of the orchestra. It is possibly the most famous and successful work composed for children and famous actors and rock stars have contributed their narrations over the years.

The Liverpool String Quartet are members of the Royal Liverpool Philharmonic Orchestra.