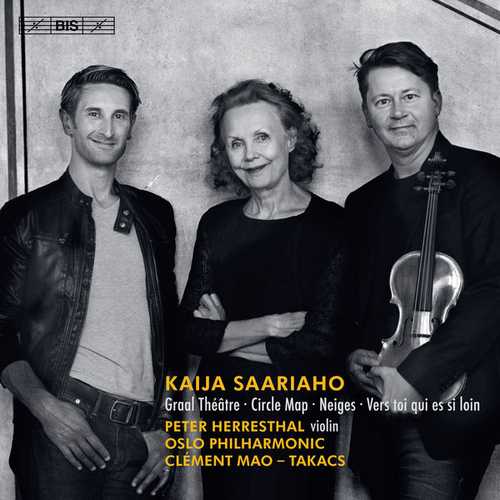 Mathematical models of reality can be transposed into audio parameters. In the same way, Kaija Saariaho has ordered her musical imaginary into a coherent form, which celebrates our place in the universe. This album presents various pieces for solo violin (played by Peter Herresthal here) and orchestra, which are gems of orchestration. They all suggest a conciliatory way of being in the world: a way of being that’s modelled by the soloist and their relationship with the orchestra.
Vers toi qui es si loin (2018) is a transcription for violin and orchestra of the final aria of the opera L’Amour de loin. The soloist plays against an enveloping orchestral texture from which there emerges from time to time a response from a flute or some lines from a harp. This intimate dialogue blends sounds together – the violin’s harmonics echoing the more resonant ones of the harp – and the beauty of the progress through the different timbres paints the fragile path from the self to the other.
The discourse becomes denser with Circle map (2012) whose electronic portion takes in Persian poetry. Conductor Clément Mao-Takacs leads the acoustic segment of the work intelligently and sensitively, as if he were directing a symphonic work. Of course, the score’s enigmatic title is drawn from mathematical models of reality. But the “circle map”, used to describe the evolution of dynamic interacting systems, here becomes pure music: the dynamic systems are none other than the voice and the orchestra, and within the orchestra itself, the solo violin and the flute. Like many composers of his generation who passed through IRCAM, Kaija Saariaho explicitly makes use of scientific models (one is reminded of Dérive by Boulez or Grisey’s Transitoires, which is rather closer).
In this recording, the musicians are totally engaged. The restitution of Vers toi qui es si loin with all its iridescences and its orchestral voluptuousness, is a success. On the other hand, Circle Map is less winning, and feels rather hemmed-in on the record. Neiges (1998), which plunges us into the vast echo chamber of its 12 cellos, is given a chilly execution and feels more like a dissection than a performance. But the listener is swept away by the vitality of the final piece, Graal théâtre (1994), where the solo violin and the orchestra, conforming with the concerto form, manage, over the course of an epic struggle, to invent a common language for a shared musical universe. An immersive communion, which must absolutely be brought to life and prolonged in concert!