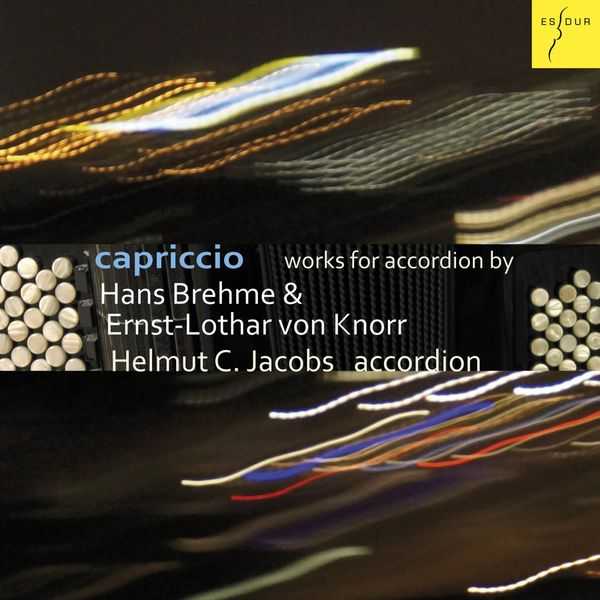 Accordion works by German composers Ernst-Lothar von Knorr and Hans Brehme, several of them premiere recordings, are performed by the noted exponent of the instrument, Helmut C Jacobs on his sixth recording for the ES-Dur/Charade label.

The music professors and composers Ernst-Lothar von Knorr (1896-1973) and Hans Brehme (1904-1957) met at Trossingen in 1943, as a consequence of their respective music colleges being relocated there because of World War II. The accordion maker Ernst Hohner (1886-1965) was based in Trossingen, and it was thanks to him that both composers wrote pieces for the accordion – which had a major influence on the subsequent development of the instrument.

The album opens with Spring Elegy and Capriccio op. 57 by Hans Brehme, a commission for the compulsory piece for an international competition in 1953. It’s followed by the three-movement Divertimento in F composed in 1956 and the Suite op. 40, Brehme’s first piece for accordion, dating from 1945, and recorded for the first time here. The Sonata in C (1949) by Ernst-Lothar von Knorr was the first sonata ever written for the accordion. Both it and von Knorr’s Suite of 1945 receive their premiere recordings.

Helmut C Jacobs studied with the accordion player Guido Wagner and has won many prizes at national and international competitions. He has been Professor of Romance Philology/Literature at the University of Duisburg-Essen since 1997. His previous recordings on ES-Dur range from 18th century boleros and fandangos (whose “lascivious gestures” led to Casanova’s view that “I could not conceive a woman refusing her partner anything after this dance”) to 20th century pieces by Wolfgang Jacobi and Sigfrid Karg-Elert.