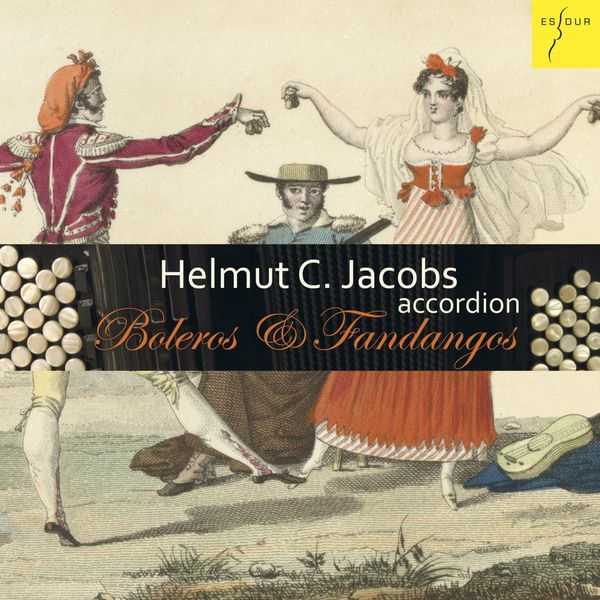 The melodies and rhythms of the fandango have fascinated the German accordionist and Romance scholar Helmut C. Jacobs since his first recording of ‘Fandangos’ (ES2037), released by ES-Dur in 2011. He continued his research and found even more works that testify that both dances had been practiced in all of Europe, both in unpretentious versions and in art music, and which he has now recorded.

Spanish rhythms, passion, dance… What seems more natural than to think of the flamenco? But its precursors, the fandango and the bolero, had already created an uproar in the years between 1750 and 1815. Casanova said of the fandango, “the gestures and the attitudes are the most lascivious imaginable…I could not conceive a woman refusing her partner anything after this dance”.

Especially when listening to Antonio Soler’s extremely virtuosic fandango, one can understand how Casanova had the impression that people fell into a kind of trance. Both dances have a wonderful infectious effect – as an elaborately improvised techno music of the 18th century.

The recorded boleros are representative of the 18th century, and it is surprising how little they have in common with Ravel’s famous ‘Bolero’, whose supposedly typical rhythm isn’t present in the early Spanish boleros. Except for the fandangos by Soler and Johann Gottfried Pratsch all other works are first recordings. In accordion arrangements however, these are first recordings too.

All pieces recorded here have been realised, true to their keyboard originals (without changing the tone pitches or structure), on a free-bass accordion with chromatic button manuals on either side, allowing the use of all five fingers on each hand. In the booklet the European success story of the bolero and fandango is presented in fascinating detail.