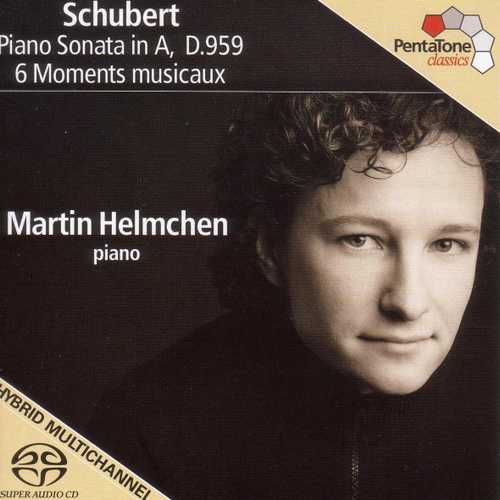 This is Martin Helmchen’s first solo recital album on PentaTone. His recording of Mozart Concertos received excellent reviews and his ever increasing amount of concert performances are securing this talented young pianists reputation.

A flourish of new recordings of Schubert’s last three piano sonatas has brought interpretations as individualistic as those available for the Beethoven sonatas, which is all to the good. This one, by the rather cherubic young German pianist Martin Helmchen, offers a fine example of creative rethinking of the work. Helmchen gives the music a Beethovenian trajectory. His reading of the opening Allegro of the Piano Sonata in A major, D. 959, is initially quite odd — tentative, and a little tense — with the notes of the opening figure punched out and kept quite separate. The lyricism, usually brought to the fore here, is present only in Helmchen’s gentle arpeggios. It’s not a dry interpretation as a whole, however, although taken together it’s on the slow and quiet side. Helmchen forges fully thought-out readings of each of the four movements, which go through a progression suggesting a series of psychological states. His Andantino movement is dark, extremely calm, almost enervated. The lively scherzo has the flavor of a reawakening, blooming into full flower with the lyricism of the rondo finale (which was given a new lease on life by the television series Wings), which gains strength and sweeping enthusiasm by pushing the tempo as it proceeds. The Moments Musicaux, D. 780, that round out the disc do not simply follow the sonata pattern; they’re taken more quickly and in general more briskly. The sound from the Dutch audiophile label PentaTone is excellent, and this disc is well worth the time of those who love Schubert’s monumental late piano works.