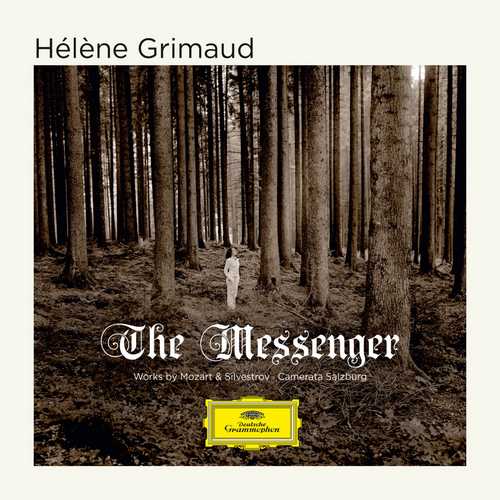 Valentin Silvestrov
06. The Messenger (For Piano and Strings)

10. The Messenger (For Piano Solo)

For her latest studio album, Hélène travels to Salzburg where she creates a fascinating juxtaposition between the eternal W A Mozart and the Ukrainian composer Valentin Silvestrov (b 1937) Hélène has long had a passion for Silvestrov’s music, which some call post modernist or even neoclassical ..”Like Arvo Pärt Silvestrov’s music is harmonic, which far from being a weakness, is an enlightenment in its own right and very powerful in its simplicity”, says Hélène The composer’s own words hint at why this is for her so intriguing I do not write new music My music is a response to and an echo of what already exists”

In selecting the music for this album, Hélène has carefully chosen music by Mozart that fits into an overall dramaturgy from Mozart’s famous unfinished D minor Fantasy, Helene transitions seamlessly into the great D minor concerto K 466 one of the most popular amongst Mozart’s 27 concertos (and one of only two in a minor key) The C minor Fantasy here signals “the end of Mozart” and a new beginning The Messenger starts with a theme reminiscent of Mozart, and like a messenger, creates a connection between the present and the world that existed before Melancholy and hope, sadness and exuberance can be felt emanating from both Mozart’s and Silvestrov’s works The Messenger, one of Silvestrov’s most performed works, is dedicated to his wife Larissa Bondarenko who had recently passed away The Two Dialogues with Postscript that serve here as an epilogue, leave the outcome open, leading the way to Schubert, Wagner and beyond