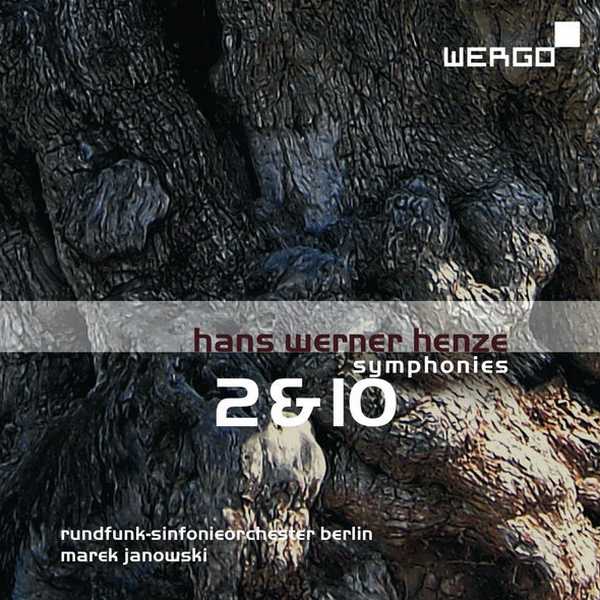 To mark Marek Janowski’s 75th birthday in February 2014, the eagerly awaited complete recording of Hans Werner Henze’s symphonies has now been finalised with Symphonies Nos. 2 and 10. Another birthday present is the special distinction recently awarded by the German Record Critics’ Award: “In 2014, the extremely versatile conductor Marek Janowski will receive an honorary award for his Wagner and Henze recordings, among others: an educator of orchestras by grace, an uncompromising fighter for quality.”

In 1949 Henze received a commission from the South German Radio for his Second Symphony, which was premiered in Stuttgart in the very same year. It was his first large-scale 12-tone composition. The composer later referred to the work as a kind of “winter music, grey and sombre. One might think that the experiences of the war had begun to press for a response in my music.”

In 1997, immediately after the premiere of ‘Sinfonia N. 9’, the great Swiss patron Paul Sacher approached Henze and said he should immediately undertake a Tenth, “to counter the old superstition that it is a composer’s ninth and tenth symphonies that pose the greatest threat to his mental and physical well-being” (according to Henze). Indeed, it seems as if Henze’s Tenth was a liberation – from Beethoven as a model, but also from the dark, suffering tone of lamentation in the previous Ninth – a tone with which Henze, as he specifically stated, did not want his symphonic writing to come to an end. More than 50 years separate Henze’s Second Symphony and his Tenth, which was to be his last.