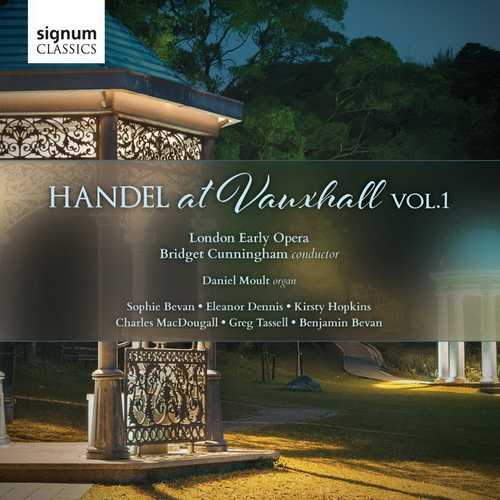 Daniel Moult
02. Organ Improvisation in the style of John Worgan and Handel

Vauxhall Gardens was a “pleasure garden,” a kind of private park where entertainment of various kinds might be presented indoors and outdoors. Part of it still exists today. Handel and others wrote music for the venue, only to see it disparaged by Samuel Johnson; partly for this reason, the selections on this album qualify as genuinely neglected Handel. They are light, but not unsophisticated. Contained on this release is music that roughly reconstructs part of an evening’s music at Vauxhall. One of the park’s pavilions contained a small organ, and the Organ Concerto in B flat major, Op. 4, No. 2, HWV 290, receives a delightful small-scale performance here from organist Daniel Moult and players from the London Early Opera orchestra under Bridget Cunningham, the creative force behind this album. The outdoor pieces would have included little strophic songs and pastoral scenes by Handel and others; these are small gems that have hardly been touched by performers. Sample the rather comically overwrought The Melancholy Nymph, HWV 228, No. 19 (track 12), or the comic pastoral Colin and Phoebe by Thomas Arne, one of a pair of Handel contemporaries included. The sound disappoints; the church acoustic makes no differentiation among the types of music heard here and isn’t really right for any of them. But this release is essential for anyone interested in understanding Handel’s musical world, and it holds a good deal of charm for any listener.