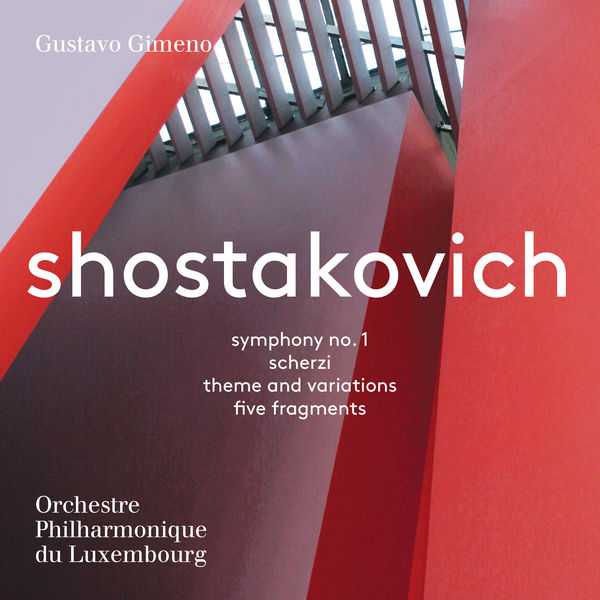 Gustavo Gimeno conducts the Orchestre Philharmonique du Luxembourg in a fascinating survey of confident, assured and striking orchestral works by the young Shostakovich. This new recording from Pentatone includes his breathtaking Symphony No. 1 Op. 10 – the student work which brought Shostakovich international fame. While indebted to the Russian masters, Shostakovich’s early works nevertheless demonstrate his precocious brilliance, originality and falir and they offer an intriguing glimpse at the evolution of his distinctive, mature style. From the easy going and good humored Scherzo Op. 1, the Tchaikovskian Theme and Variations in B-flat major Op. 3, or the Stravinskyan Scherzo Op. 7, his youthful vitality is never in doubt. But with his Symphony No 1 Op. 10 he produced his first masterpiece and found his own distinctive voice. It’s a thrilling work full of sardonic edginess, pained introspection and dramatic outbursts, and closes with a barnstorming finale. Composed 10 years later, the aptly titled Five Fragments for orchestra Op. 42 are short, pungent and austere pieces; the arresting style is modernist but the sound is unmistakeably Shostakovich. Following his acclaimed conducting debut with the Royal Concertgebouw Orchestra in 2014, Gustavo Gimeno took up the post of Music Director of the Orchestre Philharmonique du Luxembourg with the 2015-2016 season. An auspicious collaboration with Pentatone followed in 2016 and three releases with the orchestra are planned in 2017. “His musical rhetorics are refined, his grip on the structure of the compositions is accurate and convincint” observed Joep Stapel in the NRC Handelsblad, “Gimeno knew how to keep the tension and made the musicians…excel.” Elsewhere in a busy international schedule, Gimeno has debuted with major orchestras in Europe and America, and toured with the Royal Concertgebouw Orchestra to Taiwan and Japan

This recording may be aimed primarily at Shostakovich fans: the Symphony No. 1 in F minor, Op. 10, written when the composer was 19, is not terribly often recorded, and the four shorter pieces that follow it are rarer still. But the music can stand on its own for general listeners. The symphony is an entertaining four-movement work, but it may be the weakest of the group in the rather calm performance by Spanish conductor Gustavo Gimeno, leading the Orchestre Philharmonique de Luxembourg. The rest of the music, though, presents an excellent overview of Shostakovich’s early development. The jocular Scherzo for orchestra in F sharp minor, Op. 1, and Scherzo for orchestra in E flat major, Op. 7, make an instructive pair: the earlier work contains hints of the edgy Shostakovich humor, and the E flat Scherzo presents it full-blown. The most conservative work on the program is the Theme and variations for orchestra in B flat major, Op. 3, a student exercise that sounds like Tchaikovsky. The Five Fragments for orchestra, Op. 42, played without a break, are tonally daring pieces of the kind that got the composer in hot water in the 1930s, and they’re well worth revival. The performances are clean throughout, attractive for those who prefer their Shostakovich without too much of a Russian vein, and generally this is a strong choice for a good shelf or hard drive of Shostakovich.