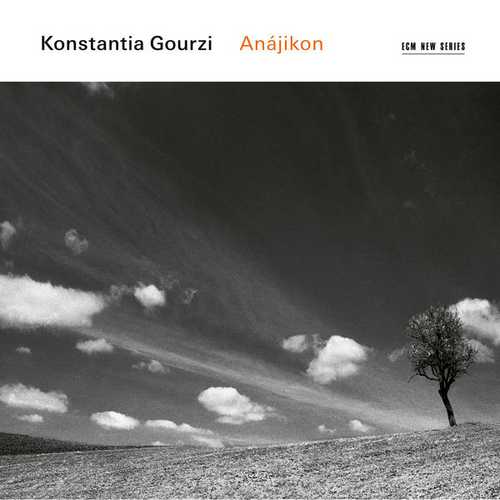 Anajikon, the second ECM album after Music for piano and string quartet (ECM 4810988) by Athens-born and Munich-based Konstantia Gourzi, incorporates her chamber and orchestral music of the past decade. The composer also conducts the Lucerne Academy Orchestra here: “I see com- posing and conducting as a whole, as an inseparable relationship,” she says. Gourzi is particularly concerned with making connections between the arts, which also relates to the question of her own artistic identity and the influence of her origins. In Gourzi’s sound language, elements of different musical tradi- tions repeatedly merge, and East and West enter into a dialogue. This album presents three of her compositions: her Third String Quartet Anajik- on, her orchestral piece Ny-el (commissioned by the Lucerne Festival, in August 2016 with the orchestra of the Lucerne Festival Academy) as well as Hommage a Mozart, three Dialogues. Her works are performed on this new recording by Nils Monkemeyer (Viola); William Youn (Piano), the Lucerne Academy Orchestra and the Minguet Quar- tett . Anajikon is preceded by the album ‘Music for piano and string quartet’ (ECM 4810988), which presented the composer’s work for the first time. UK magazine Gramophone described the album as “An absorbing introduction to an eminently worthwhile composer.”