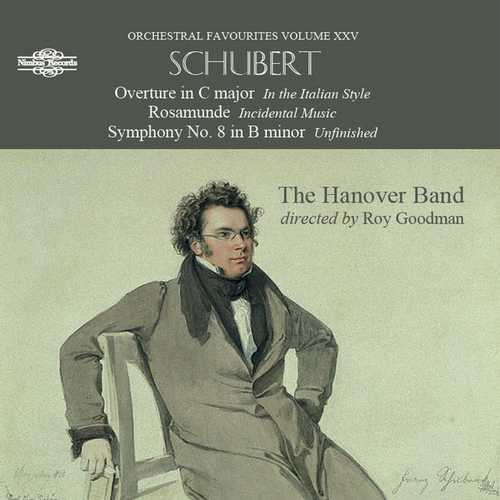 This new release features the most popular of Schubert’s orchestral repertoire, performed on original instruments by The Hanover Band led by Roy Goodman. Schubert wrote two overtures ‘in the Italian style,’ in November 1817. No doubt they were inspired by the Rossini craze that was sweeping Vienna. In the C major overture an Adagio with Rossinian wind solos precedes the main Allegro which concludes with a lively coda. Throughout the overture the jaunty Italianate rhythms and robust harmonic patterns of Schubert’s model are apparent, but the composer’s own gifts are also in evidence. From an early age Schubert was interested in composing for the theatre. He was commissioned to compose incidental music for Helmina von Chezy’s four-act play Rosamunde, which premiered in December 1823 and was withdrawn after only one performance. Schubert’s music, however, was edited and republished, and has retained popularity. Finally, the album presents his Symphony No 8 in B minor, ‘Unfinished.’ The most remarkable of his aborted compositions, the work stands in powerful contrast to his other unfinished symphonies, as the first two movements, which he completed to the detail, were among the finest he ever wrote.

In addition to Schubert’s Overture in The Italian Style that is very rarely performed – with reason, since it doesn’t present Schubert at his most inspired − but it is still worth knowing so as to notice how, at that young age, the composer was already creating his own language, while paying tribute to Rossini –, this selection features a gorgeous interpretation of the whole stage music from Rosamunde, two overtures (Alfonso und Estrella and Die Zauberharfe), and most importantly his Unfinished Symphony, one of Schubert’s absolute masterpieces. Roy Goodman and the Hanover Band give an ample, extremely colourful interpretation of the piece – it is the first symphony for which the composer used trombones, and quite generously at that; an orchestra section also featured in his Great Symphony in C major –, with just enough reflection and, above all, a sense for phrases and articulation, that most interpretations so often lack. These recordings from 1992 haven’t lost an ounce of their enthusiasm.