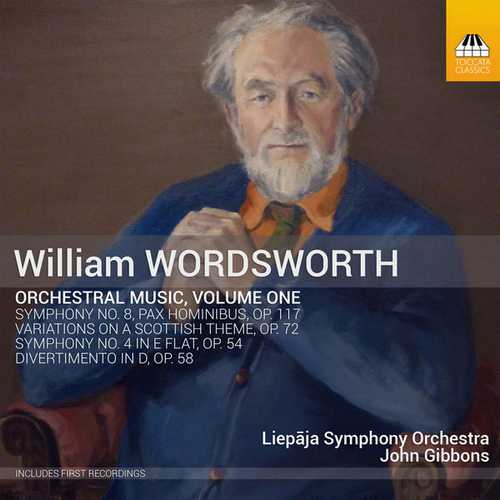 The music of London-born William Wordsworth (1908–88) – a great-great-grandson of the poet’s brother Christopher – lies downstream from that of Vaughan Williams and Sibelius. Like that of his contemporary Edmund Rubbra, Wordsworth’s music unfolds spontaneously, as a natural process, with a sense of grandeur perhaps enhanced by his move to the Scottish Highlands in 1961. Three of the four works recorded here display the sober dignity of the instinctive symphonist. The Variations on a Scottish Theme (‘Wi’ a hundred pipers an’ a’, an’ a’’),by contrast, reveal a sly sense of humour behind the serious countenance.

John Gibbons has conducted most of the major British orchestras. He has been Principal Conductor of Worthing Symphony Orchestra – the professional orchestra of West Sussex – with which he has given many world premieres of neglected works. He studied music at Queens’ College, Cambridge, the Royal Academy of Music and the Royal College of Music, winning numerous awards as conductor, pianist and accompanist. He is also a Fellow of the Royal Society of Arts, vice chairman of the British Music Society, and choral director at Clifton Cathedral. His own music has been performed in various abbeys and cathedrals as well as on the South Bank, London.