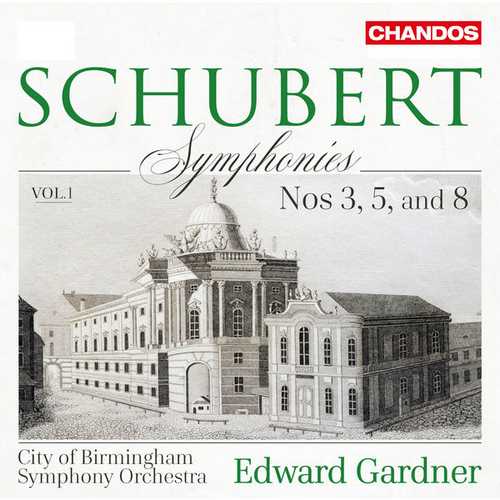 Following a highly successful series ‘Mendelssohn in Birmingham’, the City of Birmingham Symphony Orchestra with their former Chief Conductor Edward Gardner here presents the first volume in a new surround-sound series: Schubert Symphonies. This first volume comprises of three symphonies spanning across Schubert’s life. His Symphony No. 3 (1815), with its extensive and evolving slow introduction is followed by the culminating distillation of Schubertian classicism that is his ‘little’ Symphony No. 5 (1816). Scored for chamber orchestra, it tells of an influence of Mozart, for whom Schubert seemed to have felt a special affinity with around this time. Completing the album is Schubert’s much more intense (with a turbulent first movement and serene second) Symphony No. 8 “unfinished” (1822), of which only the first two movements and a skeleton sketch of a third Scherzo movement were completed.