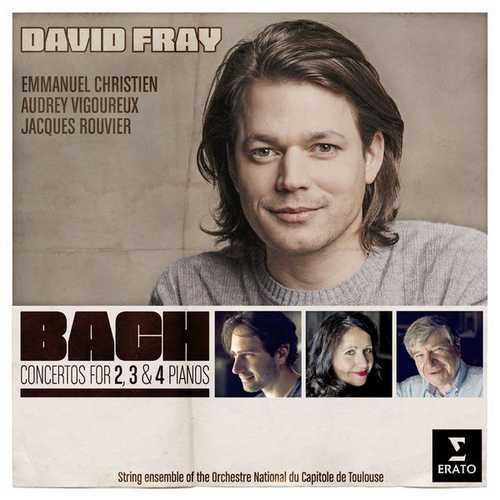 The music on this album gives rise to two intriguing questions. Firstly, are these concertos original Bachian creations? Secondly, should they be played on modern pianos. The two issues are in fact closely linked by the idea of transcription.

This is certainly a Bach reading that leans toward the old school: not only are pianos used, but there’s a good deal of pedal that produces rather Chopinesque slow movements. Sample that of the Concerto in A minor for four pianos, BWV 1065, to see whether you find the approach at all sympathetic; 50 years ago it would have been simply normal Bach performance, especially given that the String Ensemble of the Orchestre National du Capitole de Toulouse, like the first wave of Italian Baroque orchestras, is slimmer than the symphony orchestras that brought Bach down from the Romantics. If you are down with it, you’ll find performances here that are enjoyable in many ways. These concertos were all transcribed from other works, including in one case (the four-piano concerto) a concerto for four violins by Vivaldi. The talents of lead pianist and director David Fray are well-suited to this aspect of Bach’s genius: Bach fools with the texture of the originals, and Fray’s playful, varied attacks draw attention to what’s happening. Another attractive feature is that the four pianists involved make up, in Fray’s words, “a family affair”; Fray, Audrey Vigoureux, and Emmanuel Christien were all students of the fourth player, Jacques Rouvier, at the Paris Conservatory, and the interchange among the players in all these concertos is lively and unforced. The downside here, and it’s major, is the sound: the Carmelite Chapel in Toulouse is a lovely structure, but acoustically it bears little resemblance to the domestic settings for which these concertos were made, and in the Concerto for four pianos it produces little more than a Spectoresque Wall of Sound. In the pair of two-piano concertos, you are a bit more able to hear what’s going on. Even with this drawback, this is an enjoyable Bach concerto recording.