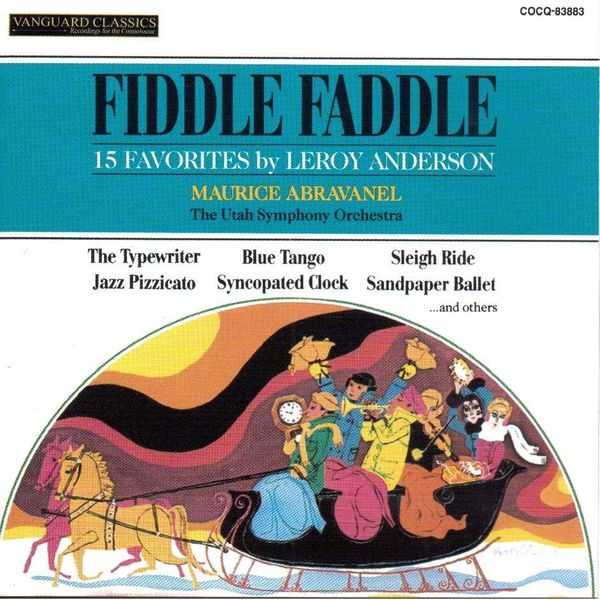 Maurice Abravanel was best-known on recordings for some heavy repertoire — he was one of the first conductors in history to record all of Mahler’s symphonies, and among the shining jewels of his output with the Utah Symphony for Vanguard were his recordings of Varèse, Milhaud, and Honegger’s Pacific 231. However, in the 1930s and ’40s he was regarded as one of the greatest conductors of Broadway musicals that the world had ever seen, though this important legacy is little-preserved on records. Nonetheless, Abravanel had a way with light music, and as a result, his 1967 collection of Leroy Anderson favorites, Fiddle Faddle, was his best-selling Vanguard recording by far. It compares favorably to the classic recordings made for RCA Victor by Arthur Fiedler and the Boston Pops and the mono Decca recordings made by the composer, and in the latter instance, the sound quality issue weighs heavily in favor of the Vanguard.

In creating Fiddle Faddle: 15 Favorites by Leroy Anderson, Vanguard’s successor, Artemis Classics, has converted the venerable old Fiddle Faddle into an extraordinary twenty-first century format. This is a Silverline Classics DualDisc, which carries a standard audio layer on one side and a DVD layer on the other. On the DVD side, those who have DVD home theater systems capable of decoding five-channel audio can listen to these 40-year-old recordings in stunning, multi-channel sound. Although extras are listed, they don’t amount to much — a memorial tribute to Abravanel, delivered by a longtime friend and fellow musician who read these same words at the conductor’s funeral, must have been touching then, but fall pancake flat in this presentation. More interesting a short segment devoted to how Artemis restores its Vanguard recordings, though the quality of the video is barely that of a good student production. There is not a stick of video of Abravanel himself conducting in this package, although there are plenty of still photographs employed. In sum, this is great if you would like to hear Abravanel’s Leroy Anderson in the best audio quality possible. If one were music lover enough, however, to have invested in the hardware to play such a disc properly, than it seems that selections such as Abravanel’s Milhaud, Honegger, and in particular his Varèse Amériques would be a more desirable software to match.