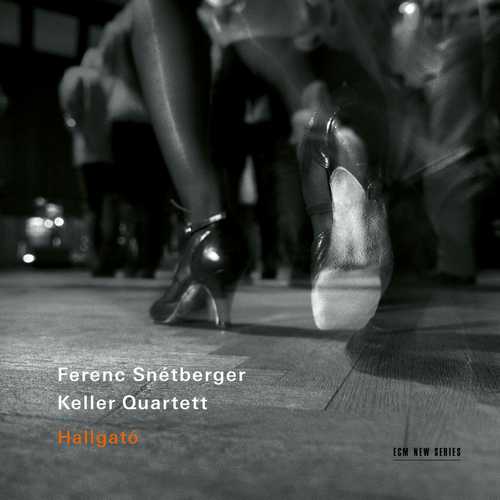 Recorded live in the Grand Hall of Budapest’s Liszt Academy, Hallgató is an inspired and moving album from Ferenc Snétberger and the Keller Quartett. Hungary’s outstanding acoustic guitarist and its foremost chamber group are heard together and separately, in a programme with compositions by Snétberger, Shostakovich, John Dowland and Samuel Barber, which unfolds with its own internal logic and dramaturgy. This album marks the artists’ first recorded collaboration, although Snétberger and András Keller have worked together often in live contexts.

The concerto In Memory of My People was written by Snétberger in 1994 and subsequently rearranged for guitar and string quintet by the composer and Béla Szakcsi Lakatos. Snetberger’s repertoire and compositions have long been influenced by jazz and classical music and especially by the musical traditions of the Sinti and the Roma. The introductory movement of In Memory, titled “Hallgató”, integrates Ferenc’s early memory of an old melody sung by his grandmother, a melody handed down through the ages and played at funerals. Snetberger, whose mother was Roma and whose father was a member of the Sinti, dedicated his concerto to the memory of forebears persecuted and murdered. But In Memory of My People is more than music of mourning. Both a threnody and a celebration it also speaks of resistance, resilience, and liberation – all effectively conveyed in the vivid playing of guitar and strings, with the Keller Quartett here joined by bassist Gyula Lázár.

Dmitri Shostakovich’s 8th String Quartet, also dedicated by its composer to the victims of war and fascism, is played with characteristic intensity by the Keller musicians. Subtle arrangements of John Dowland find Snétberger with the Keller Quartett for “I saw my lady weep” and in duo with cellist László Fenyö for “Flow, my tears”, a proto-blues from the era of Shakespeare, almost exactly contemporary with Love’s Labours Lost. The Keller Quartett address the yearning quality of Samuel Barber’s Molto adagio from his String Quartet op.11, and Snétberger offers a glimmer of hope with the tender solo guitar piece “Your Smile”. The concluding “Rhapsody 1”, again with Snetberger and string quintet, is new arrangement of a piece written by Ferenc for a film project about the Roma and the Holocaust, bringing the themes of the concert – grief and its transcendence – full circle.

Ferenc Snétberger was born in 1957 in Salgótarján, Hungary. He began playing classical guitar at 13, and six years later entered the Bela Bartók Conservatory in Budapest where he studied until 1981. Since then he has given concerts as a soloist and collaborated with numerous international players. An ECM recording artist since 2013, his previous releases for the label include the solo album In Concert, which was also recorded at the Liszt Academy, and a trio recording, Titok, with bassist Anders Jormin and drummer Joey Baron. Titok was described by US magazine Jazz Times as “warm, elegant music, unassuming in its romanticism, firm in its substance, organic in its natural, unhurried flow”.

Collaboration with András Keller began in 2003 when Keller conducted the concerto In Memory of My People with Ferenc Snétberger and the Orchestra di Padova e Del Veneto. Subsequently Keller invited Snetberger as guest soloist with the Budapest Concerto Symphony Orchestra on a number of occasions.

The Keller Quartett was formed at the Liszt Academy in 1987, with György Kurtág as one of its principal mentors, and the group made its ECM debut with a definitive account of Kurtág’s Musik für Streichinstrumente in 1995, soon followed by a revelatory exploration of Bach’s Die Kunst der Füge. The Keller Quartett also appear on Svete Tikhiy, with music of Alexander Knaifel, and on Lento with music of Alfred Schnittke and Shostakovich. A 2013 release intriguingly juxtaposed György Ligeti string quartets and Samuel Barber’s Molto adagio (a movement reprised on Hallgato), drawing much critical praise. The 2015 album Cantante e Tranquillo, conceived by András Keller and Manfred Eicher, drew together slow movements of a great arc of music – Bach, Beethoven, Kurtág, Kigeti, Knaifel and Schnittke – in a recording of pieces which, though not written together, seemed to have been predestined for each other. The same might indeed be said of the pieces gathered on Hallgato, and played with such flair by Ferenc Snétberger and the Keller Quartett.