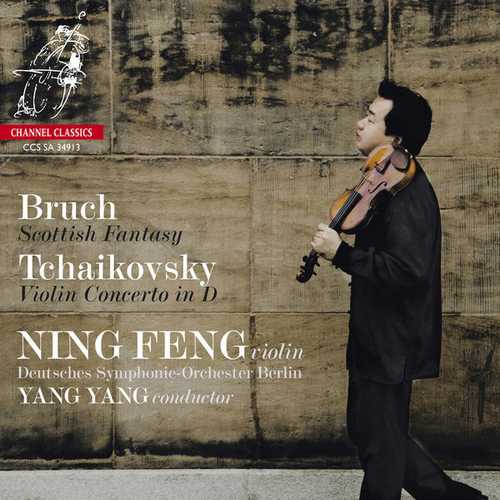 After two very successful solo discs it was time for Ning Feng to move on and record two beautiful pieces for solo violin and orchestra.

The great success of Bruch’s 1st Violin Concerto cast a shadow over his other music. However he wrote another work for violin and orchestra which is perhaps even more special. For the soloist it is technically more difficult than the 1st Violin Concerto, and it is a free fantasy rather than a traditional three-movement concerto. It is the Scottish Fantasy op. 46 for violin and orchestra (1880), written for the legendary virtuoso Pablo de Sarasate, a Spaniard who spent his entire life in France.

Tchaikovsky’s Violin Concerto in D was to be dedicated to the virtuosic violinist Leopold Auer, but he turned it down as “unplayable”, after which it remained unperformed for three years until Adolf Brodsky finally gave the first performance in Vienna on 4 December 1881. Reactions were mixed: the soloist was cheered, but the music was rejected. The sourish critic Eduard Hanslick said he could “hear the music stink”, claiming that the violin was no longer being played but rather “flogged, destroyed and bruised black and blue”. Such prejudices have not stopped this breathtakingly virtuosic work from becoming one of the most frequently performed of all violin concertos.