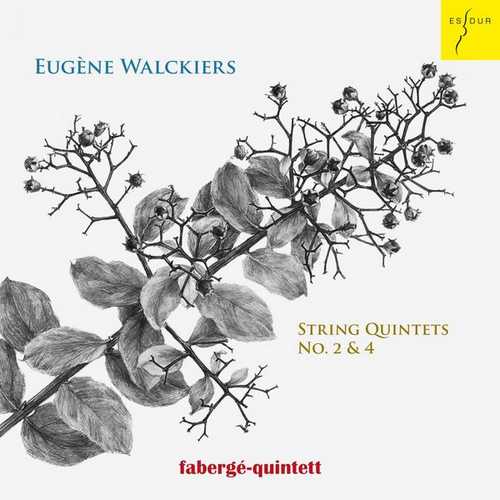 The Faberg Quintet excels in the ravishing premiere recordings of the String Quintets Nos. 2 and 4 by the almost forgotten French composer Eugne Walckiers (1793-1866).

Following their highly acclaimed and award-winning recordings of the string quintets by Adolphe Blanc, the piano quintets by Ralph Vaughan Williams and Hermann Goetz, and the CD “Gran Sestetto” featuring Russian piano sextets, the ensemble has now recorded with its fourth CD featuring late works by a composer who lived in Paris in the 19th century during a time of upheaval and new beginnings. Composed in the 1850s, these works for classical string quartet with double bass are gems of chamber music and will continue to delight audiences today with their classical beauty and dazzling wealth of ideas!

The period of the middle of the 19th century, when many things were in a state of political and social upheaval in Paris, was also marked by rich artistic, literary and compositional creativity. A new cityscape emerged at an alarming pace; the small winding streets disappeared in favor of wide boulevards and open squares. Some like the writer Georges Sand rapturously praised the change; others mourned it as a loss of what they had come to love and trust. It was precisely in these years of upheaval that Eugne Walckier’s string quintets were written.

The French composer and flutist Eugne Walckiers, whom contemporary critics and colleagues praise effusively, is known today at best in professional circles for his chamber music pieces for flute. Now, the rest of the musical world has the opportunity to rediscover him.

The Opus 94 and Opus 108 quintets recorded here are two of four quintets that take one by surprise in their thematic variety and beauty and which give no hint of the often violent uprisings. They were composed at a time when salon culture was highly valued in bourgeois circles and famous figures of cultural life, such as the Paris-based Gioacchino Rossini or the French double bassist Achille Gouff, organized chamber music soires that were considered legendary. Walckiers was regarded in Gouff’s salons, along with Onslow and Blanc, as one of the three highly revered living composers and as a contrast to the revered trinity of musicians of the past, the “trinite vnere des musiciens du pass,” to the likes of Haydn, Mozart, and Boccherini. Walckier’s chamber music are compositions that would not be described as modern or ahead of their time and yet are far from being dusty or outdated.

The second quintet, Opus 94 in C minor, dedicated to the French composer George Onslow, who died in 1853, is an emotionally moving work. In addition to its dramatic nature, the quintet plays simultaneously with elegant, dance-like melodic lines, thereby memorializing the revered friend.

Opus 108 in A major, the fourth and last quintet, is dedicated to the violinist Emile Magnin, who played a Stradivarius already a sought-after instrument back then and was associated with one of the most famous professional ensembles of his time. This Opus 108 is a firework of moods and ideas that dazzles and thrills, infused with Spanish flavor and a wonderfully colorful melodic richness.