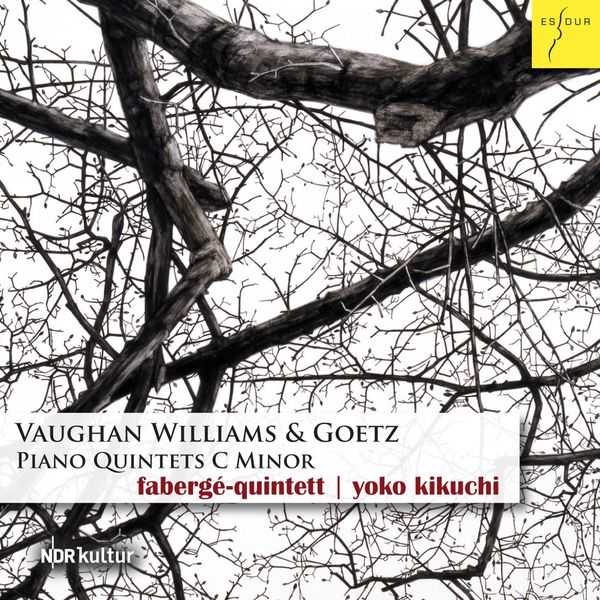 Piano Quintets – both in C minor – by Ralph Vaughan Williams and Hermann Goetz are paired on the Fabergé Quintet’s second recording for the ES-Dur label, this time with the Japanese pianist Yoko Kikuchi.

In quintet music with double bass two great pieces stand out: Dvorak’s famous String Quintet op.77 and the even more famous ‘Trout’ Quintet by Schubert. But other chamber works with this instrumentation are mostly little known and seldom performed, despite there being a variety of such pieces that fully deserve greater exposure.

The Fabergé Quintet, formed by five members of the NDR Symphony Orchestra in 2000, aims to redress this balance. Their first album – the premiere recording of three String Quintets by French composer Adolphe Blanc (ES2046) – received the ECHO Klassik Award for Chamber Music Recording of the Year (strings/19th century music). Now they turn their attention to two piano quintets in which the second violin is missing at the expense of the double bass.

The line-up here – violin, viola, cello and double bass with piano – was used by Schubert to accommodate his commissioner’s wishes for a more prominent melodic role for the cello in his ‘Trout’ Quintet but this shift to deeper tones also makes possible an exploration of the darker regions of musical expression. However, this instrumental potential drew only two composers of the late-romantic era: Hermann Goetz (1840-1876) and Ralph Vaughan Williams (1872-1958), both of whom chose C minor, the sombre “key of fate” for their works.

Goetz, who died young from tuberculosis, wrote his quintet in 1874 while a similarly youthful Vaughan Williams composed his in 1903, the year that marked the beginning of his research into folk music. Withdrawn by Vaughan Williams in 1918, the Piano Quintet was performed for the first time in many years in 1999 after his widow lifted the ban.