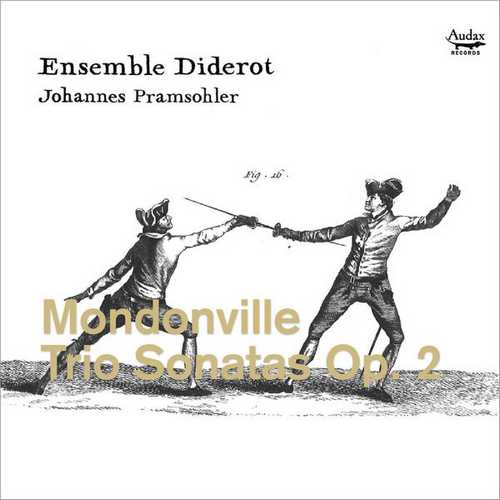 Following on from their hugely successful, critically acclaimed Meister: Il Giardino (ADX13705), Audax Records brings us their next release, a world premiere recording.

While the magnificent motets and the virtuoso sonatas for violin and harpsichord by Jean-Joseph Cassenéa de Mondonville are widely known today, his Trio Sonatas op. 2, which were published in 1734, have until now been completely ignored by the musical world.

Like the sibling works of Jean Marie Leclair’s op. 4 (1730), they represent a highly successful fusion of French and Italian influences and offer not only first class musical entertainment à la française, but also moments of great profundity.

The musicians of Ensemble Diderot, in partnership with the Foundation Royaumont, present this rediscovery of French repertoire with youthful verve and exuberant creativity. The Ensemble Diderot is undoubtedly one of today’s most interesting and original chamber music groups in Europe. It dedicates itself to the exploration and performance of the Baroque trio sonata repertoire of the seventeenth and eighteenth centuries, and performs on original instruments. Future projects will see the group perform works from Monteverdi to Hasse as an orchestra.

Johannes Pramsohler was born in South Tyrol, studied in London and is now based in Paris. He has established himself internationally as an eminent expert of historical informed performance. He is regularly invited to lead Europe’s most important baroque orchestras.