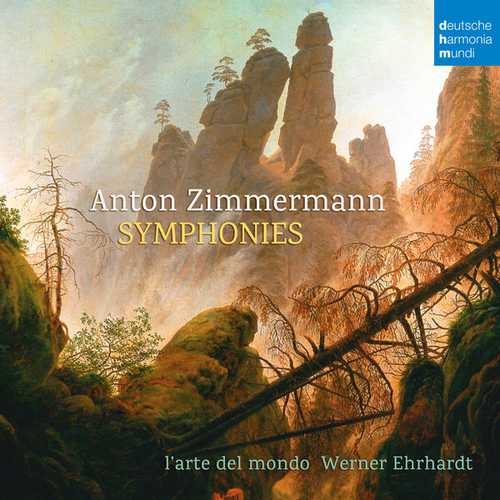 First world premiere on disc for these three Symphonies from Anton Zimmermann (1741-1781), a contemporary composer of Haydn, who unfortunately passed away at 39—because when listening to those gems, we wonder where he would have stopped had he lived up until, let’s say, 1810 for example… We notice straightaway that Zimmermann thumbs his nose at every standard: in the use of keys (in 1771, a symphony in E-minor was kind of a rarity: Haydn himself, a great experimenter, has only one under his belt), in the architecture—the order and type of movements are somewhat knocked over—and in the instrumentality too. Reckon that the Symphony in B-flat major uses wood instruments as well as as many soloists independent of the string instruments; and that in the splendid Symphony in C minor, beginning with a singular adagissimo, he doesn’t hesitate to include trombones. In 1770! An era when, at best, trombones were used for special effects at the opera, or to increase the solemnity of a piece of sacred music, but never in the symphonic field. Additionally, he doesn’t hesitate to finish two of these symphonies on an appeased pianissimo tone, where usually people end resoundingly. We eagerly await to discover the thirty-six other symphonies from this strange character. Icing on the cake, many of his works were long attributed to Haydn, because we couldn’t imagine so much bravery and genius being issued from a simple Zimmermann… The Arte del mondo performs in an exemplary way, conducted by Werner Ehrhardt.

L’Arte del Mondo give the music suitable advocacy, playing with admirable confidence and accuracy. It’s a jolly good thing that musicians such as Ehrhardt and labels such as DHM continue to explore and enhance our understanding of the more marginal figures of the early Classical period.