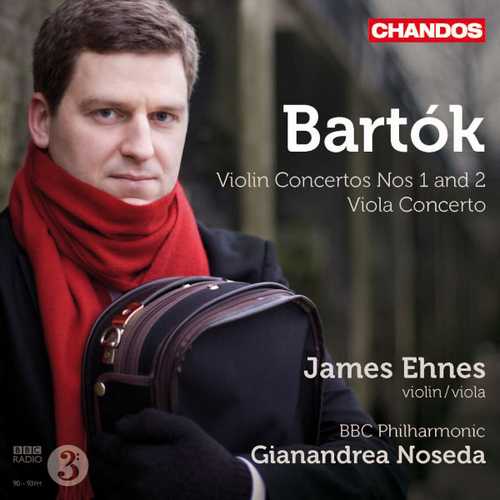 Hailed as ‘the Jascha Heifetz of our day’ (The Globe and Mail, Canada), the violinist James Ehnes is widely considered one of the most dynamic and exciting performers in classical music, appearing regularly with the world’s finest orchestras and conductors. Accompanied here by the BBC Philharmonic under Gianandrea Noseda, Ehnes is the soloist in Bartók’s two violin concertos in which he plays the ‘Marsick’ Stradivarius of 1715, as well as in the viola concerto, performing on the ‘Rolla’ Giuseppe Guadagnini viola of 1793, on loan from the Fulton Collection.

James Ehnes said of this disc: ‘These three concertos are among the most striking examples of Bartók’s early, middle, and late periods, each showing a very different side of one of the great musical voices of all time; they are among my very favourite pieces to perform’.

Bartók wrote his first concerto for violin in 1908 for the young violinist Stefi Geyer, to whom he was romantically attached at the time, which explains the warm feelings expressed in the first movement; though the relationship ended shortly after the work’s completion, Bartók and Geyer remained on friendly terms. The composer shelved the concerto, which remained in Geyer’s possession, unperformed until two years after her death, nearly fifty years after it was written.

Violin Concerto No. 2 was commissioned by the Hungarian violinist Zoltán Székely almost thirty years after the first concerto was completed. Bartók at the time would have preferred to write an extended set of variations, but Székely maintained that, seeing as he was paying for the work, he should get what he asked for. Bartók reluctantly agreed – but later pointed out that he had had his way after all, seeing as the central movement is in variation form, and the finale works with variations of themes from the first movement.

The Viola Concerto is among the last pieces on which Bartók worked. Existing only in the form of extended sketches at the time of his death in September 1945, the work was completed by the violist and composer Tibor Serly, a fellow Hungarian and close friend of Bartók’s. Compared to earlier works by Bartók, the concerto is harmonically restrained with a melancholy quality that was always evident in his music, but which intensified in his late years.