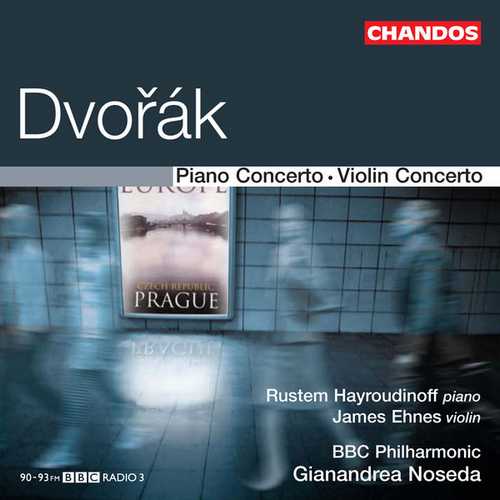 The Russian pianist Rustem Hayroudinoff gives a commanding performance of the Dvorák Piano Concerto, always a tricky work to play thanks to unpianistic piano writing. Hayroudinoff basically follows the composer’s original piano text but modifies it in places where he feels the original is ineffective in favour of Vilém Kurz’s ‘performing version’. Yet where he feels that Kurz’s changes ‘seem to push the piano part too far in the direction of a typical romantic concerto’, he has ‘found his own solutions for staying true to Dvorák’s intentions’. Controversial or not, the result is a performance in which Hayroudinoff brings out the joyful, carefree quality of Dvorák’s inspiration, demonstrating what a wonderful fund of good melodies it contains.
The clarity of his articulation in the trickiest passagework is phenomenal, and his phrasing in the central Andante sostenuto is limpidly beautiful.
Helped by full, rich sound which yet allows fine detail, Noseda and the BBC Philharmonic match the subtlety and point of the soloist’s playing, establishing this as an outstanding modern version.
Having Dvorák’s Violin and Piano Concertos on a single disc makes an apt and generous coupling.
The Canadian violinist James Ehnes gives a strong, incisive performance with speeds on the fast side in the first two movements and with the furiant finale bitingly fresh. His rapid vibrato gives a distinctive timbre to his playing, making the slow movement less warmly romantic than it is in some rival versions, yet Ehnes offers real magnetism in his performance.
The recording, generally well-balanced, is yet less full and warm than in the Piano Concerto: strangely so, as both recordings were made by the same conductor and orchestra in the same venue.