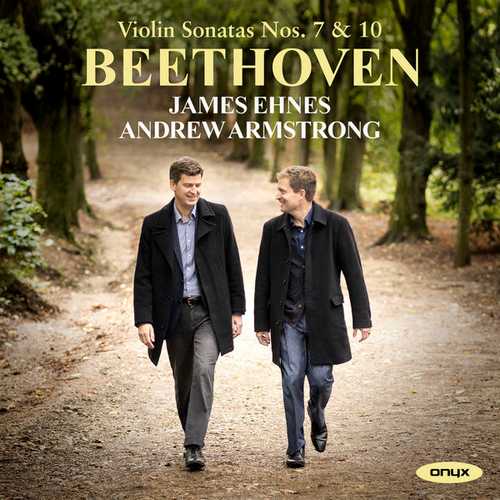 On this album the dramatic ‘7th Sonata’ of 1802 is paired with the serene ’10th’ composed in 1812 for the great violinist Pierre Rode.

It almost feels superfluous to review the latest installment of James Ehnes and Andrew Armstrong’s Beethoven sonata cycle, when the previous three albums have been so consistently covetable, and thus so consistently written about to that affect. We’re all running out of superlatives. That said, this fourth album is also the final one, and thoroughly merits the spillage of yet more glowing ink.

The set’s outstanding sonatas are two of only three sonatas Beethoven wrote with four rather than the standard three movements. Sonata No. 7 with its C minor tonality is the most dramatic and turbulent of the trio of Op. 30 Sonatas, clearly looking ahead to the “Kreutzer” of the following year. Sonata No. 10, composed a decade later for the great French violinist Pierre Rode, is then a gentler proposition entirely, sitting alone in its Op. 96.

Those already engaged in meaningful relationships with the first three volumes of this recording cycle will be pleased – albeit unsurprised – to learn that its culmination gives us the same natural, vivid, but-not-too-close acoustic quality, the same light agility proving modern-instrument readings of this repertoire can sound every bit as “right” as period-instrument ones, and the same clear understanding that these sonatas weren’t conceived as “violin sonatas” but as “sonatas for keyboard and violin”, i.e. with the piano positioned on an equal footing with the violin.

On to the details, and Armstrong sets the stage at the outset of No. 7 to fabulous affect, with the unpredictable, Mephistophelian edge he’s brought to the shaping of the semi-quaver bunches of the piano’s darkly threatening opening subject; and across the sonata he and Ehnes serve up an edge-of-the-seat blend of theatrical turbulence and fine elegance – fiery dynamic contrasts and colorful shaping articulated with unfailingly neat elegance, with their respective tones wonderfully pure and clear. Their Adagio is both as cantabile as you could wish, and deliciously peppered with dynamics-shaped surprises.

No. 10 is no less satisfying, Ehnes’s sweet tone and ability to spin a long legato line bringing constant pleasure; not least in the Adagio, which sounds all the more serene for its flow, Ehnes and Armstrong having not milked its romance more than they have to – at 5’25 it’s on a par with Faust and Melnikov’s period reading, and significantly faster than the likes of Kremer and Argerich at 6’28”, or indeed Zukerman and Barenboim’s 7’13”. A warm finale, containing both delectably langorous moments and invigorating folky outbursts, rounds off a cycle that should bring repeated joy to listeners of both the modern and period instrument camps.