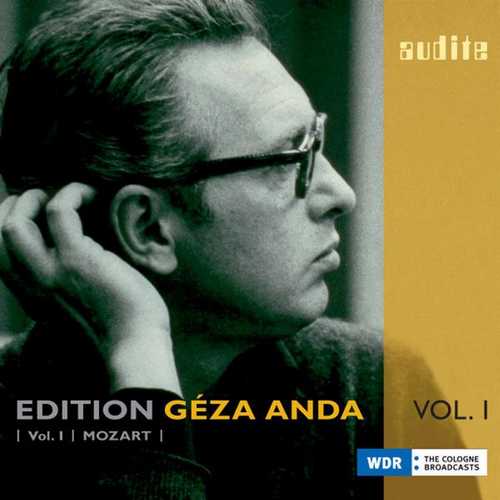 With this double CD, Audite opens a four-part series of recordings of the Hungarian pianist Géza Anda (1921-1976) from the archives of the West German Radio Cologne. These are both studio- and live-recordings from 1952 until 1970 which have until now remained unpublished or are premiere CD recordings. It is the aim of this edition to display a representative cross section of Anda’s diverse repertoire and also to close a delicate gap in his discography.

Published for the very first time are the recordings of the four famous Viennese piano concertos by Mozart: Anda appears as soloist and conductor in one and is also joined by renowned conductors Joseph Keilberth and Constantin Silvestri together with Camerata Academica Salzburg and the Radio Symphony Orchestra Cologne.

Finally, Anda can be experienced for the first time as a conductor in an impetuous recording of Mozart’s Symphony in C major KV 200.

The four-part series, largely consisting of so far unreleased studio and concert recordings of the WDR Cologne from the years 1952 to 1970, closes a gap in the discography of the Hungarian Géza Anda, one of the most important pianists of the second half of the 20th century. With piano compositions from three epochs – including works of Mozart, Beethoven, Brahms, Liszt, Schumann, Chopin and Bartók – Anda presents a representative cross-section of his wide repertoire, revealing himself not only as an exceptional pianist free of any form of romanticisation, but also as a conductor.