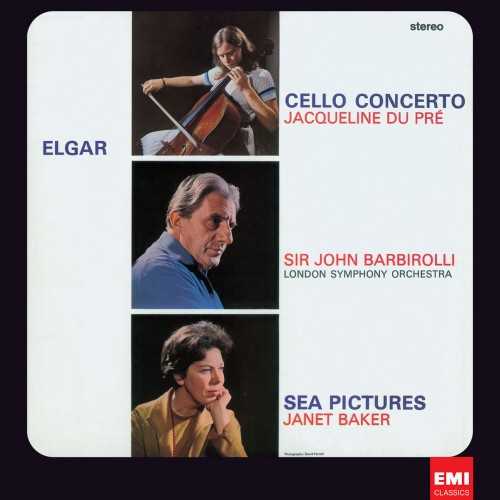 Edward Elgar’s Cello Concerto in E minor, Op. 85, his last notable work, is a cornerstone of the solo cello repertoire. Elgar composed it in the aftermath of the 1st World War, when his music had already gone out of fashion with the concert-going public. In contrast with Elgar’s earlier Violin Concerto, which is lyrical & passionate, the Cello Concerto is for the most part contemplative & elegiac.

The 1st performance was a debacle because Elgar & the performers had been deprived of adequate rehearsal time. The work did not achieve wide popularity until the 1960s, when a recording by Jacqueline du Pré caught the public imagination & became a classical best-seller.

The tragic genius cellist Du Pré is best at Elgar’s concerto. The violent yet beautiful solo that is integrated with the song is overwhelming, & Barbirolli’s conducting is also of the highest grade, as if it was written for Du Pré.

HRAudio.net review:
This seems to be a straight reissue of UPC 4943674173556, which was remastered in 2011 and UPC 4988006887916 (for the Elgar pieces), combined into a single disc. The sound of the Elgar concerto and of Sea Pictures is excellent and I would recommend the SACD upgrade if one already has the Red Book version. The Dvořák concerto, on the other hand, has always been recognized as a recording with major sonic issues, the biggest problem being the balance between the solo cello and the orchestra. I don’t own a Red Book version of this one, so I can’t make a Red Book-SACD comparison. I can say, however, that it still sounds rather poor on SACD. It unfortunately seems to be one of those recordings that no amount of remastering and resolution can save. Of course, I am only reviewing the sonics here! The actual performances are excellent; Jacqueline du Pré’s playing on the Elgar concerto, in particular, is absolutely wondrous.