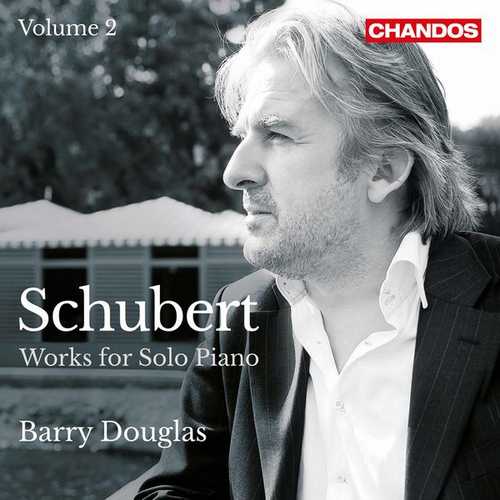 With this second volume of his Schubert keyboard cycle on Chandos, the outlines of Northern Ireland pianist Barry Douglas become clearer. There’s a common vision of Schubert, ignored by the public, playing music mostly for friends and lovers, that favors an intimate approach many musicians have followed in one way or another. But Douglas goes in another direction, offering big, Beethovenian Schubert. This is true not only in the Piano Sonata in A major, D. 959, where Douglas pushes the tempo in opening material, urging it forward with energy (sample the beginning of the opening movement) and offers an especially chilly, gloomy slow movement. Douglas’ readings of the Four Impromptus, Op. 90, D. 899, are also large in scope, again with lots of rubato. Here, in these works where there’s a strong mental image of Schubert playing for a small group of connoisseurs, Douglas is especially unexpected, but taken on their own terms the performances are powerful and expressive. The opening C minor impromptu, sounding much like a Beethoven sonata movement, grabs your attention and doesn’t release it. Chandos moves to an unusual venue, an auditorium at the Cork School of Music, in search of a spacious acoustic that supports Douglas’ interpretations, avoiding their usual brisk, clean sound. It’s a bit of a surprise, but again, it hangs together. Recommended.