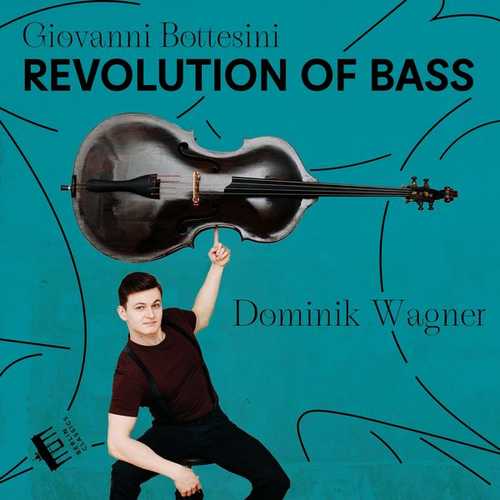 Virtuoso repertoire, brilliantly arranged. Dominik Wagner presents here the solo Double Bass Concerto No. 1 in F-sharp minor as well as two duets with Benjamin Schmid on violin and Jeremias Fliedl on cello. Additionally some bonustracks featuring soprano and piano have been recorded. The musicians will be accompanied by the Württembergisches Kammerorchester Heilbronn under Emmanuel Tjeknavorian a great wish of Dominik Wagner, who played the first concert together with Tjeknavorian ten years ago and has been close friends with him ever since.

There was nothing anywhere near this sort of double-bass technique before”, he says of the available repertoire, “it is just incredibly good music. Brilliantly orchestrated. The sections in this fantastic piece never drown each other out, it really is a model soloist’s concerto!”. It’s true that the works are played relatively seldom, but this will be due to their very high technical hurdles. The alternation between harmonics and low register takes place in an instant, sometimes the bass plays higher than the violins – and the music still has to sound light and airy. It’s a challenge. That said, Bottesini exploits to the full the instrument’s sonic potential, which comes over particularly well in partnership with the violin and the cello.

Accordingly, Dominik Wagner looked for his perfect partners: “I played with Benjamin Schmid in November 2020, we recorded the “Trout” Quintet together. He has been one of my greatest role models ever since I was a boy. I took the opportunity to ask him if he’d play on the recording. Jeremias Fliedl is an absolutely outstanding cellist, on a musical and technical level that practically no-one else commands. For such a demanding and rarely played piece as the Bottesini Duo, he was the ideal choice”. Dominik Wagner was concerned to show off Bottesini’s versatility.

This programme is not limited to works with orchestra; there are bonus titles on the album as well. Une bouche aimée, Tutto che il mondo serra, Allegretto capriccio and Rêverie with soprano Ursula Langmayr and Can Çakmur at the piano shape the repertoire into a veritable Bottesini kaleidoscope: a round tour through the works of a composer who was regarded as one of the most important musical personalities of his day.

Bottesini is an unknown quantity to many music-lovers, to whom “Revolution of Bass” will come as a rewarding expansion of their horizons. Dominik Wagner comments: “People have this chance to hear new music that will appeal to them at once. If you don’t know what to expect, your enthusiasm will be all the greater in the end!”