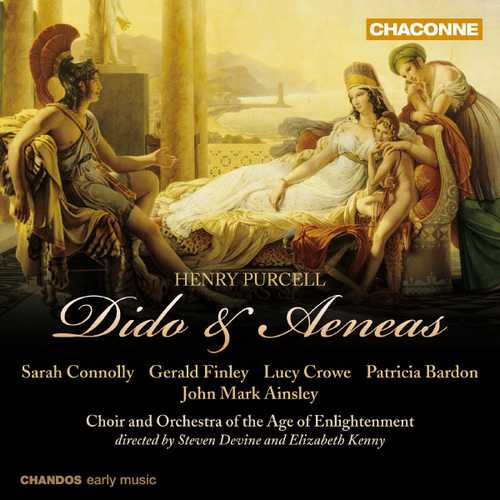 Chandos’ featured release is a new recording of the first English operatic masterpiece, Purcell’s tragedy Dido and Aeneas. Starring Sarah Connolly, Gerald Finley, with the Orchestra and Choir of the Age of Enlightenment, it is released to commemorate the 350th anniversary of Purcell’s birth.

Directed from the keyboard by Steven Devine and Elizabeth Kenny as in recent concert performances, the ensemble presents the opera in a version that incorporates other dance works by Purcell.

There have been two revolutions in scholarly thinking about Dido and Aeneas and both had serious implications for historically inclined performers, and demand a creative response today. The musicological backdrop to this recording results in a performance closer to the court entertainment of Purcell’s day, in which musical dramas evolved from the English theatre tradition.

Sarah Connolly, the quintessential Dido of the early twenty-first century, has been the driving force behind this recording. She writes of the project, ‘It seems I have known Purcell’s Dido all my life and feel able to express myself in this music like no other… As a character, Dido fascinates me to the point of obsession’.

Connolly has performed with the Orchestra of the Age of Enlightenment on many occasions, including two productions at Glyndebourne – Giulio Cesare and St Matthew Passion – as well as Dido and Aeneas at the Proms, the South Bank Centre and Tetbury Festival. One recent review of Connolly’s Dido had the following to say: ‘It was the sheer depth of emotion Connolly infused in her portrayal of Dido that was truly remarkable. Emotion flowed off the stage from the intensity in her voice and through her actions. Her final aria, one of the most beautiful in English baroque music, brought a tear to the eye in a hall so quiet you could hear a pin drop… a moving portrayal of this tragic heroine’ (MusicalCriticism.com).

This impressive performance by an extraordinary group of musicians makes for a significant addition to the catalogue.

Sarah Connolly and the Orchestra of the Age of Enlightenment will perform Dido and Aeneas at the Royal Opera House, Covent Garden in March 2009.