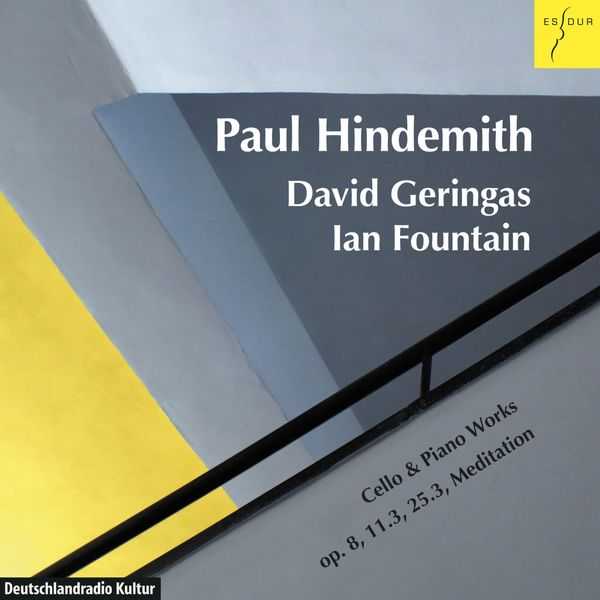 Distinguished Lithuanian cellist David Geringas, together with pianist Ian Fountain, plays four engaging pieces by Paul Hindemith. All but the 1938 transcription from the ballet music ‘Nobilissima visione’ are early works for cello, with and without piano, dating from 1914-1922, and they demonstrate how the young composer was developing his style.

Hindemith had a special relationship with the cello, as his younger brother Rudolf was an excellent cellist and a long-time chamber musical partner of the composer. The Three Pieces for Cello and Piano sparkle with wit and already point clearly to his later works. An exuberant wager led to the composition of the Sonata for Solo Cello – here the listener can sense the security and self-confidence of a young composer with his first successes behind him, making his own way with determination.

The Meditation from the ‘Nobilissima visione’ has a completely different character, the music flowing peacefully and serenely. The first movement of the Cello Sonata op. 11/3 is breathless and highly virtuosic, while in the second slower movement Hindemith’s reactions to his experiences of the First World War come to the fore, doubt and resistance stand opposite melancholy and resignation.

David Geringas is one of the world’s leading cellists. He studied under Mstislav Rostropovich and won the Tchaikovsky Competition in 1974. Moving to Germany, he taught in Hamburg, Lübeck, and from 2000-2009 at the ‘Hanns Eisler’ Music Academy in Berlin, all the while pursuing an acclaimed career as a soloist. He has made over 100 CDs, including eight previous recordings for the ES-Dur label. Geringas and his accompanist of many years Ian Fountain received an Echo Classic for their last ES-Dur album, ‘Pohádka’ (ES2045).