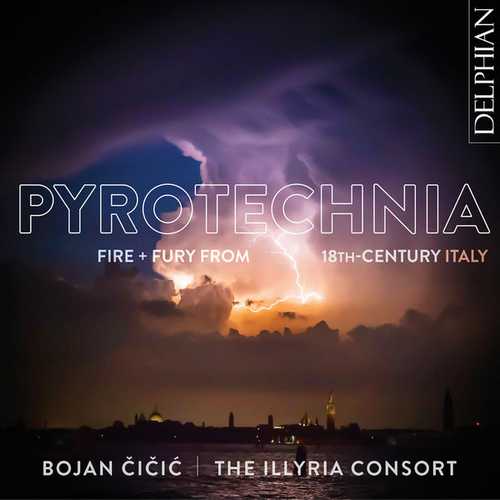 Contemporary accounts of the violin playing of Antonio Vivaldi, the “Red Priest”, show the extent to which he raised the instrument to hitherto unknown extremes of soloistic virtuosity – able, in its spontaneity and sonorous brilliance, to hold its own against an orchestra in fiery and unforgettably dramatic confrontations.

Thanks to Vivaldi’s pupils, eager to imitate the master’s wilder imaginings, several of his improvised cadenzas have been preserved. Here, they inspire typically white-hot performances from Bojan Čičić and The Illyria Consort of four violin concertos by Vivaldi, Tartini and Locatelli which all have movements ending in a “capriccio” – a sequence designed to show that the idea of a virtuosic display cadenza, usually associated with the classical concerto of a later period, had already developed during the first half of the eighteenth century. Fittingly, the album’s title is borrowed from John Babington, author of the earliest guide to fireworks published in Europe – Pyrotechnia!