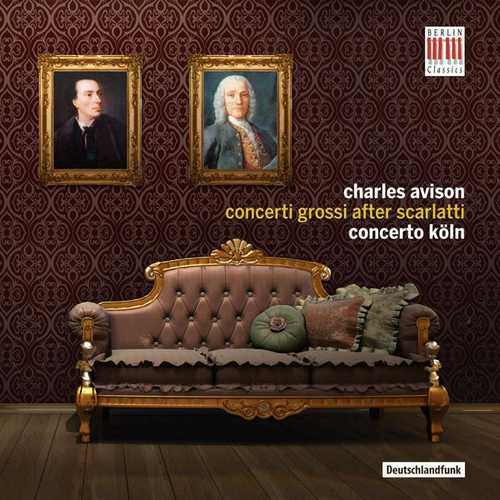 The music on this album takes a little bit of explanation that the words “Concerti Grossi After Scarlatti” does not fully supply. These are not really arrangements or orchestrations of keyboard sonatas by Domenico Scarlatti, even though they are sometimes described that way. Instead, as the booklet notes by Kai-Hinrich Müller put it here, this “is music by Avison and Scarlatti simultaneously” (or at least, one might say, sequentially). The basic source material is the set of Essercizii (Exercises) published by Scarlatti in England in 1739. These were among the few sonatas of Scarlatti that were internationally known during the composer’s lifetime; Charles Burney remarked that “everyone played, or at least tried to play, Scarlatti’s Essercizii.” Enter English composer Charles Avison, who attempted to fill an obvious market niche by arranging them for a small orchestra. The keyboard pieces contain basically Italianate material, with loud-soft contrasts and registral blocks; there is no question of trying to orchestrate some of the wilder harmonic experiments or Spanish effects of some of Scarlatti’s sonatas. But they are not “concertos” for keyboard, and there are not enough slow ones to make up three-movement concertos. Avison reworked the melodic material into orchestral-suitable shapes, pulled in material from other sonatas (some of them unknown), and may have written some slow movements to match outer-movement pairs. In short, what you hear is sort of an adaptation of Scarlatti, and in places almost a fantasy. You could just listen to concertos by Vivaldi or Sammartini instead, but the whole thing is sufficiently unusual to be interesting in itself, and the veteran Concerto Köln delivers lively, idiomatic performances. Recommended for Baroque enthusiasts.