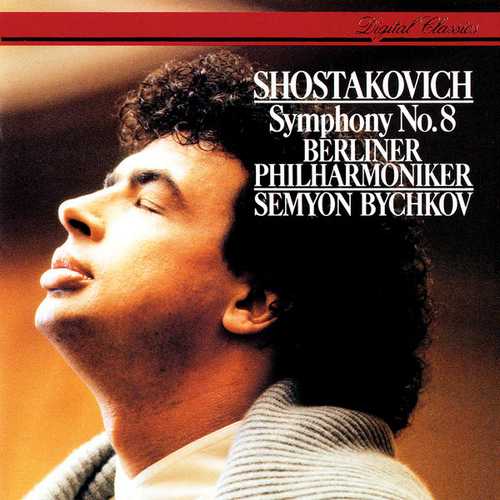 For a while there in the late ’80s and early ’90s, it looked like Semyon Bychkov was going to be the next big conductor. He was signed to the Philips label and his debut recordings with the Berlin Philharmonic were greeted with reviews that bordered on the rapturous. But it didn’t last: after a while, Bychkov stopped making recordings and one hardly hears his name mentioned as one of the up and coming great conductors.
What happened? Who knows. Maybe he alienated his manager. Maybe he alienated the orchestras he conducted or their managements. Maybe there just isn’t enough room at the top for another up and coming great conductor in these days of diminishing interest in classical music. Or maybe Bychkov was never all that hot to begin with: he got lucky and his luck didn’t hold.
Based on the evidence of his 1990 recording of Shostakovich’s Eighth with the Berlin Philharmonic, it’s probably the latter. His interpretation lacks intensity and tension: the great arching span of the opening Adagio doesn’t quite hold together over its entire length and, despite the increasing tempo through the development, the tautness of the music seems to dissipate so that the movement’s climax is anticlimactic and the long English horn solo that follows is simply dull. And, considering that this is the Berlin Philharmonic, the world’s greatest super-virtuoso orchestra, it doesn’t play all that well.
There are too many examples in every movement of the ensemble slipping, the entrances being a bit off, and the dynamics being unbalanced. These are not, of course, problems with the orchestra, but problems with the conductor, for he controls entrances and balances. But at least in this recording, Bychkov didn’t.