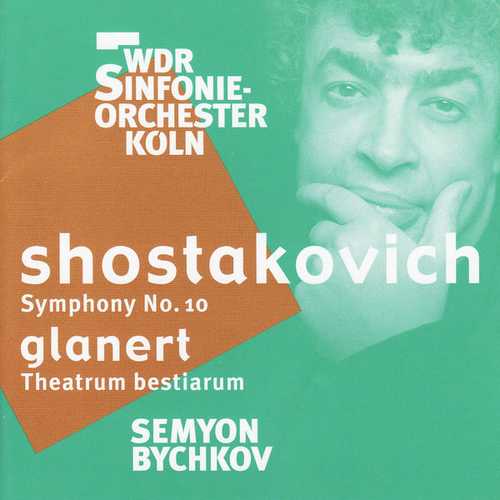 Unlike some of Shostakovich’s symphonies that carry a specific subtitle or outlined program, the Tenth Symphony carries no such descriptive subtitles and Shostakovich himself never admitted directly to the symphony carrying any subtext. However, its place in Soviet history is impossible to deny; written only months after the death of Stalin, Shostakovich’s biographer Solomon Volkov asserts that the symphony is indeed in response to the fall of the despotic tyrant. Even the Soviet government accused Shostakovich of inserting anti-Stalinist sentiments into the program of the Tenth Symphony. How much of this speculation is true is subject to interpretation, but the passion and aggression that fill this symphony are undeniable. As with many of his previous Shostakovich recordings with the WDR Symphony Orchestra Cologne, conductor Semyon Bychkov’s insightful interpretation of the Tenth Symphony exposes listeners to the full breadth of emotion that fills this symphony. The orchestra’s sound is exceptional, moving deftly between moments of almost total silence and calm to full tuttis with almost explosive sound. The SACD surround sound puts listeners in the center of the orchestra with remarkable clarity. This CD also features Theatrum bestiarum by German-born composer Detlev Glanert. Despite the energy and excitement of this new work, it almost seems like an afterthought when following on the heels of Shostakovich’s great Tenth.