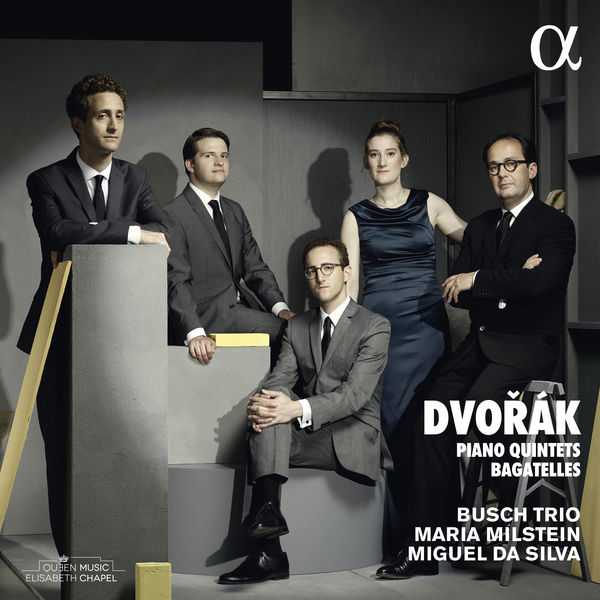 The third volume of this four-part series of trios, quartets and quintets for piano by Dvořák is dedicated to two Piano Quintets and Bagatelles, the Trio Busch welcoming French viola player Miguel da Silva – formerly of the Ysaÿe quartet, between 1984 and 2014 – and also the violinist Maria Milstein, an associate of the Queen Elisabeth Music Chapel in Belgium. This ambitious project saw the light of day thanks to the young Busch Trio’s arrival as residents at the Music Chapel in September 2014. The First Piano Quintet in A Major, composed in late summer 1872, might have been lost to posterity, as it seems that Dvořák destroyed the manuscript. But a friend made a copy, which allowed the work to survive the composer’s hasty judgement. The self-assurance with which the composer deals with the combination of piano and strings is clear; in many places, the score prefigures the famous Second Quintet which closes this album. At this early stage in his career, his influences remain clear, in particular the influence of Schubert. When he looked back on his earlier works, as he would do now and then, Dvořák remembered the quintet of his youth and asked his trusty friend for the copy of the work. As was often the case with him, the reflection on an old work led to the composition of a new one in the same form, in such a way that he wound up creating a new quintet in the space of just six weeks in 1887, when he was approaching the pinnacle of his international fame. Between these two stand-out works for quintet, our musicians have chosen the Bagatelles of 1878, initially written for two violins, cello – not a viola – and harmonium, a household keyboard instrument which was very widespread in those days. Composed at the same time as the first volume of the Slavonic Dances, the Bagatelles share the same national accents. Here they are given not on the harmonium but with the piano, as the original score leaves the performers the choice of the two.