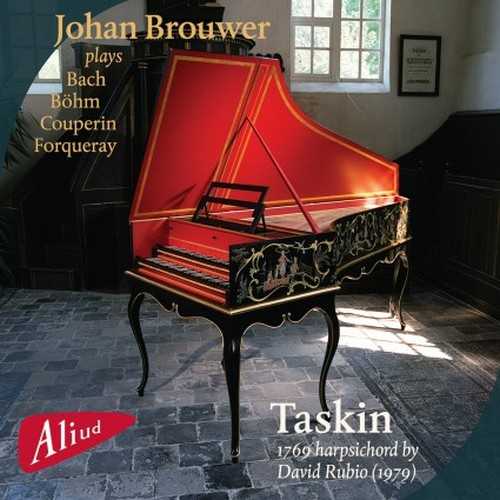 Bach and the French baroque :: The working title of the programme is Bach and the French baroque. L’art de toucher le clavecin by François Couperin (1668-1733) was published in 1716 as a manual for the French style and gives important instructions for playing the harpsichord as regards finger positions and ornamentations. The préludes are written-out improvisations in the style of the Préludes non mésurée.
The Suites of Georg Böhm (1661-1733) were produced in an environment orientated towards France, like the court in German Celle, where the French consort of Duke Georg Wilhelm resided. After her husband’s death, she lived for some years in Lüneburg, where Böhm worked in the Johannis-Kirche. Besides the usual dances, the Suite in F Minor played here contains for instance a French Ciaconne.

Pascal Taskin :: The instrument played is a copy built by David Rubio (1979) after an instrument by Pascal Taskin (1769). The original instrument remained in the possession of the Taskin family until 1952, when it passed into the hands of Raymond Russell, founder of the famous Russell Collection in Edinburgh. Taskin had his workshop in Paris as successor to Etienne Blanchet. The chinoiserie was made by Ann MacTaggert after examples of instruments painted by Gerard Dagly. Dagly (1653-1714) was born in Spa and worked many years for the Prussian court in Berlin. My Rubio instrument was renovated in 2013 by Cornelis Bom (Nieuwolda), who introduced new strings with different measurements and a new intonation.

Johan Brouwer (1946) studied organ under Wim van Beek and music theory under Frans van Eeden at the Groningen Conservatory of music, then harpsichord at the Amsterdam Conservatory of music. After his soloist exam he took up further studies with Gustav Leonhardt. Johan Brouwer followed masterclasses by Ton Koopman, René Saorgin and os van Immerseel.Johan Brouwer has given concerts in the Netherlands, France, Portugal, England and Germany and as leader/harpsichordist formed part of the Groningen baroque orchestra Collegium Musicum, concentrating not just on the great traditional works of the baroque but also on unknown work from the 17th and 18th centuries. He also worked for a long time as conductor of the Winschoten Chamber Choir, with which he performed much 17th century music together with the Collegium Musicum Groningen.