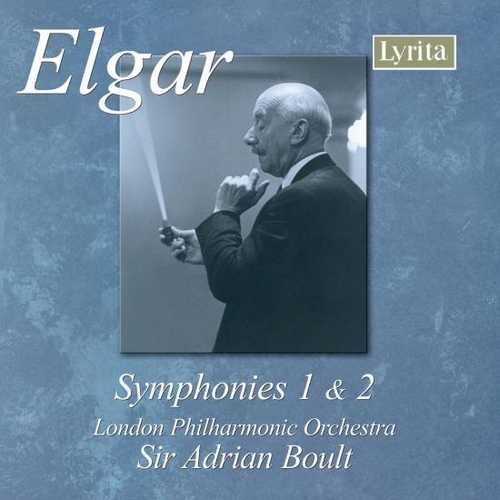 Sir Adrian Boult conducts with plenty of vim and vigour, the Elgarian grand sweep is present and correct and Boult’s grasp of the symphonies’ architecture never falters. Boult’s Lyrita readings are more dynamically expressive than his EMI recordings in that there is more intensity and a greater sense of urgency – dynamic thrust! Boult takes great care over moulding and shaping phrases, the music’s ebb and flow captivates the listener and the reflective moments – the First Symphony’s Larghetto is sublime – are incredibly moving – full of Brahmsian warmth – as Boult generates a sense of nostalgia and loss – loss of Empire… the Setting Sun… lost love, lost youth, loss of innocence? Boult first conducted Elgar’s Second Symphony in 1920… this truly is a “Passionate pilgrimage of a soul.” under Boult’s baton. Of course, this is Elgar and there is grandeur, nobility and a sense of pageantry with great rhythmic drive and forward momentum delivered with thrilling force by the London Philharmonic Orchestra.

“In 1968, when Sir Adrian Boult recorded the two Elgar Symphonies for Lyrita, he wrote an open letter to Gramophone, couched diplomatically but reflecting his fury that at the sessions his recording manager had forced him on technical grounds to have all the violins on the left instead of his usual habit of dividing them between the two sections. That said, and 40 years on, the comparisons with Boult’s other recordings of the Elgar symphonies demonstrate very clearly how fine they are, arguably the finest versions he ever recorded. Compared with the EMI versions recorded less than five years later, they are tauter, the ensemble noticeably crisper. The recording is brighter and clearer in this transfer. The difference is particularly marked in No 2 which, as Elgar said, was a work which Boult was the first conductor to make a success after the disappointing reception given at its premiere. The comparison is closer with the mono recording of No 2, which Boult recorded with the BBC SO in 1945, a superb performance but which is still marginally outshone by the Lyrita version.” (Gramophone Classical Music Guide)