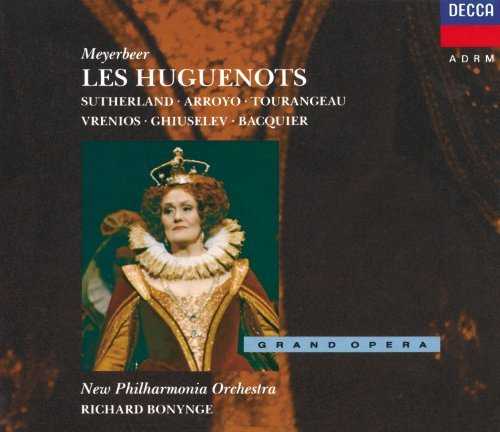 A hundred years ago, Meyerbeer’s operas were among the bread-and-butter staple of the world’s most famous opera houses. Nowadays, all of them are rarities. There are various theories as to why these operas have disappeared from the repertoire–the difficulty of the music, the rise of Wagnerism, and so forth. Fortunately, the beautiful arias Meyerbeer wrote for these operas have at least kept the names of the works themselves in the mind of the public, and so the occasional performances that these operas receive are important and well publicized events in the music world.
Of the half-dozen or so mature Meyerbeer operas that are still revived (the youthful works are mostly footnotes in the music history books), Les Huguenots is probably the most popular. Its several big arias have received many recordings and some have even made it to the cinema. Jeanette MacDonald’s performance of the page’s aria in the 1937 film Maytime is a classic, but not everybody knows that Marion Talley had beaten her to the punch by singing this same aria in her single film called Follow Your Heart, made in 1936 (she also performed part of the Act IV duet with tenor Michael Bartlett in the same film).
Fans of this opera have mostly had to rely on private recordings, and fortunately there have been some very good ones, such as the 1962 La Scala and the 1971 Vienna performances, both of which however are cut. But Les Huguenots lovers have true reason to rejoice at the reissue of this recording originally released at the beginning of 1970, and which reunites the cast and conductor of the 1968 Covent Garden concert performance of the opera.
I think the true star of this recording is conductor Richard Bonynge. Although his conducting can sometimes be less than incisive, I find him to be darn near perfect here, with the scene of the Blessing of the Swords being a particular standout.
Among the singers, the most famous is easily Joan Sutherland as Queen Marguerite de Valois. Sutherland and her husband Bonynge were particular champions of the music of Meyerbeer, having recorded several of his arias in their two-LP set of French arias made around the same time as this recording. Fortunately, that French set and this Huguenots were made when Sutherland was at the top of her very considerable form. The only disappointing aspect is that Marguerite’s role is not larger than it is. Of the opera’s five acts, the Queen is only onstage for Act II and for a brief appearance at the end of Act III (her silent return at the very end of the opera does not matter for our purposes here). But this recording is a must for all Sutherland fans.
Martina Arroyo has very good credentials for this kind of music, having, among other things, also appeared in the same composer’s L’africaine in Vienna in 1977, of which there is a good-sounding private recording, and recorded Verdi’s French grand opera Les vepres siciliennes in its standard Italian translation as I vespri siciliani for RCA Victor earlier in the decade. She is in very good form as Valentine, and the nearly complete recording fortunately reinstates her Act IV aria which is usually omitted in live performances, including the two I mentioned above. The principal contribution of Huguette Tourangeau as the page Urbain is another often-cut piece, the second-act aria “Non, non, non, vous n’avais jamais, je gage.” Meyerbeer added this low-lying aria for Covent Garden contralto Marietta Alboni, whose voice was so deep that she sang the baritone role of Carlo at the first Covent Garden performance of Ernani, after the two men the company first invited to sing the role turned it down. Tourangeau’s upper range is not that strong, and she and Sutherland sometimes trade lines in their Act II ensembles, but she is still very enjoyable.
Perhaps the most controversial casting in this set is that of tenor Anastasios Vrenios as Raoul. Raoul is a pivotal role, being the only one of the seven leads to sing in each of the five acts, and is also a very difficult part for one tenor to encompass. For the first act and most of the second act, the role requires a lyric tenor suited to Donizetti’s Don Pasquale; the second-act finale and the rest of the opera require a dramatic tenor of the kind who would be successful in Verdi’s Il trovatore. Vrenios is definitely the former, and so he sensitively sings Raoul’s first-aria “Plus blanche,” and admirably partners Sutherland in the second-act duet “Beaute divine,” which is often trimmed so much as to become almost a soprano solo. Vrenios doesn’t really have enough voice to cope with the heavier music of the rest of the opera, although his enthusiasm is always in evidence. Both he and Arroyo are somewhat cavalier in their treatment of the French text.
Nicola Ghiuselev displays a gruff Slavic bass which is more than appropriate for the crusty old retainer Marcel. In the less showy parts of Saint-Bris and Nevers, Gabriel Bacquier and Dominic Cossa are always adequate.
There are some very minor cuts in the opera, mostly in the third act. Interestingly, the legendary Mapleson cylinder of the third-act finale made live from the stage of the Metropolitan Opera at the turn of the last century contains a little extra music that is not in this recording.
Each recording of Les Huguenots that I have heard has something to add to my enjoyment and appreciation of the opera. Still, this recording is my first choice. Highly recommended.