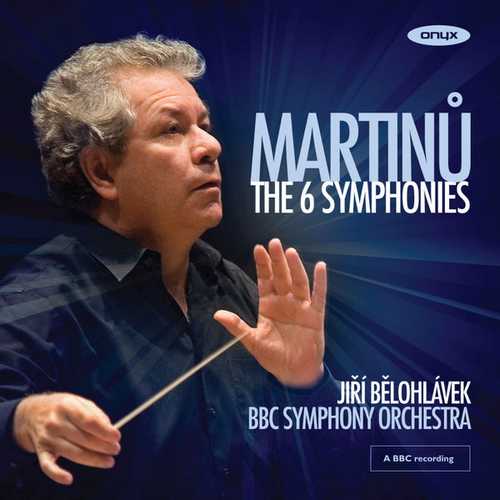 Jirí Belohlávek’s live 2009 set of the six symphonies of Bohuslav Martinu marked the 50th anniversary of the composer’s death, as commemorated by the BBC Symphony Orchestra in a series of concerts at London’s Barbican. At once ingratiating and enigmatic, magical and urbane, Martinu’s symphonic cycle is a substantial body of work that should be more popular with audiences. The atmospheric orchestration, the lively rhythmic impulse, the elastic melodic designs, and the harmonic ingenuity of the music bring immediate pleasure and communicate wondrous images and emotions. Yet the symphonies also seem difficult to pin down, because Martinu’s originality — not quite post-romantic, not quite neo-classical — seems to have sprung from a personal development that doesn’t fit with received notions of European modernism. These works are also profoundly unfamiliar to most listeners, another reason for their strangeness. The relative scarcity of recordings has seriously delayed Martinu’s acceptance in the west, and the symphonies have usually been heard, when heard at all, on separate recordings. Even so, there have been a few noteworthy sets by Neeme Järvi, Bryden Thomas, Vladimír Válek, and Václav Neumann, so the addition of Belohlávek’s recordings to this esteemed company is increasing the public’s awareness of these works. The playing on these recordings is outstanding, both in technique and expression, and the sound of this triple CD package is spacious and full, with great orchestral depth, breadth, and physical presence.

Recorded live at the Barbican in London, these recordings represent the first complete CD cycle of Martinu’s symphonies conducted by Jiří Bělohlávek. The critically acclaimed concerts were given to mark the 50th anniversary of Martinu’s death in 1959.

Martinu’s six symphonies are a major contribution to 20th-century symphonic literature, and yet are still undervalued. Spanning the years before, during and after the Second World War, they capture the turmoil, hopes and fears of the composer and his homeland – a homeland that suffered unimaginable cruelties under the Nazis. At the end of the war, Martinu was the only major Czech composer of his generation to have survived.

Yet through the underlying currents of menace in the later works, the irrepressible Czech spirit survives, and the country’s folk music is never far from the surface in these powerful and sincere works. As conductor Jiří Bělohlávek says ‘I personally love all of Martinu’s symphonies for the rich, colourful orchestration and undeniable Czech flair which always prevail in them, despite the fact that they also reflect the musical developments of their time.’