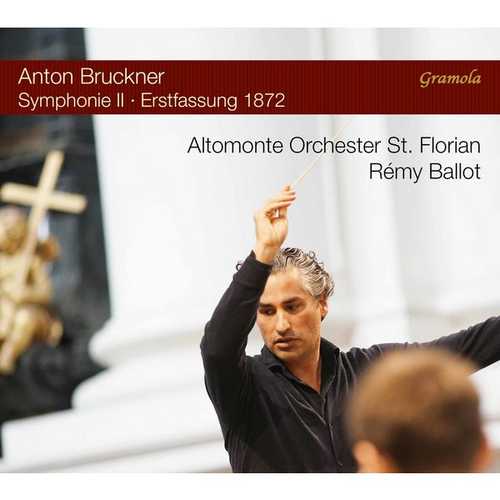 Bruckner’s Second, like most of his symphonies, underwent numerous changes and revisions during the composer’s lifetime, in this case on the advice of his patron, Hofkapellmeister Herbeck, before the first publication by Bruckner himself, “so as not to overwhelm the audience”. The sheet music of the very first ‘unheard’ version lies in the archive of the Sankt Florian Abbey, from which the prominent Bruckner researcher William Carragan reconstructed the first untouched version of this great symphony. This version is presented as live recording from the “Bruckner Tage 2019” with the Altomonte Orchestra under the baton of Remy Ballot.

The Altomonte Orchestra St. Florian was founded in 1996, the 100th anniversary of Anton Bruckner’s death, by Augustinus Franz Kropfreiter (1936-2003, composer, organist and regens chori of St Florian) and Thomas Wall (solo cellist) on the basis of an initiative and with the support of the mayor Mag. Eva Reisinger. Since 2003 Matthias Giesen (Music University Vienna, organist and, from 2003 to 2017, regens chori of St. Florian) has been the conductor of the Altomonte Orchestra, while Rémy Ballot has been the “Principal Guest Conductor” since 2013. The orchestra’s name refers to the Baroque painters Martino and Bartolomeo Altomonte, who with their frescoes gave the formal state rooms of the monastery of St. Florian their unique and incomparable atmosphere. The Altomonte Orchestra regards the cultivation of the music tradition and church music in St Florian as a special responsibility.